The strong halogen light on the dusty white walls was in sharp contrast to the deep black darkness outside. The medical jargon flew through the air. I tried in vain to follow along, as the doctor tried to discuss types of antibiotics with Camilla on his broken English. She sat on a plastic chair at one corner of his desk. Our host, Magzoub, sat at the other corner, leaning forward and listening closely. I was a bit behind Camilla, leaning against a hospital bed. 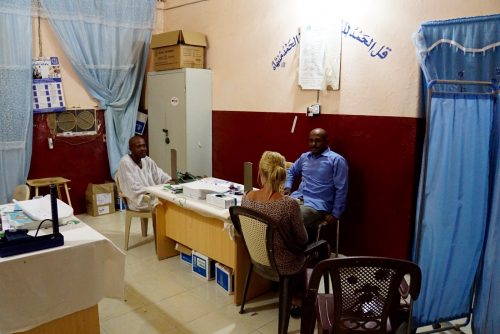 Since long before we left, Camilla has talked about how she looked forward to seing “the African hospitals.” I might have smiled a little. In my mind a hospital is not a tourist attraction you just go to and get a tour. But as soon as Magzoub heard Camilla was a doctor, he declared that we would go see the hospital. Magzoub was known by everybody in the small town Abri. He was the owner of the only place to stay in town, Magzoub’s Nubian Guesthouse. The place had been recommended by a Dutch couple in an expedition truck, who we had met at the Sudanese border. 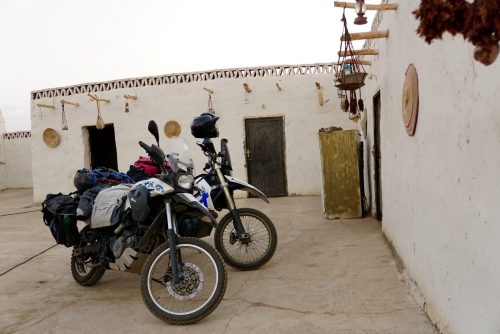 It was a primitive place with a handful of rooms without aircondition or any other ventilation. On the other hand, there was no glass in the windows. The rooms shared toilets, but we were the only guests, so we had everything to ourself. What the hotel lacked in luxury, Magzoub gave back ten times in hospitality. He was an ever happy 33 year old guy, driving around town in his 1948 Morris Minor, honking greetings left and right. He invited us to his house for dinner. His wife had cooked delicious korsa and mashi. We – especially Camilla – got to say hi to his 4 month old daughter, and Camilla had to answer a multitude of questions about child care and baby diseases. 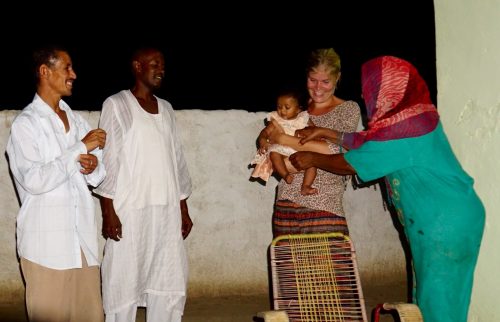 When we arrived at the hospital after dinner, it was Camilla’s time to ask. There was a single doctor on duty, who showed us around and answered our curious questions as best he could. The entire hospital had only two doctors associated, who worked opposing shifts. The one we talked to had just been employed there one day earlier, so he did not know many details about their day-to-day operations. We never found out how many people the hospital had to cover, but it was at least an area stretching 100 km north and 150 km south. They had one ambulance, a Toyota Landcruiser with a couple of benches in the rear. When we were there, the hospital took care of maybe 25 patients, but the doctor could not tell us their capacity. Magzoub had clearly taken us there in the hope the we could provide them with some new hospital machines. We did not exactly have any in our panniers, but Camilla was offered a job multiple times anyway. 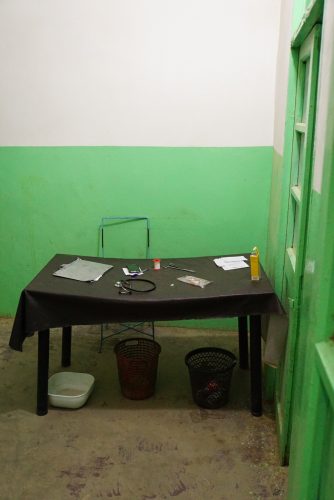 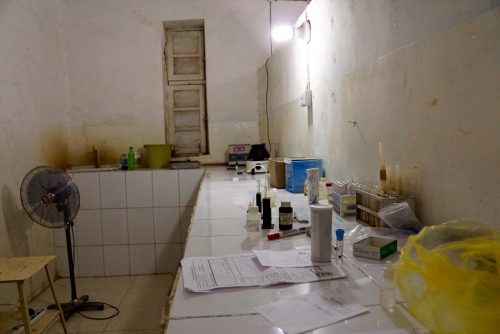 And just like that, Sudan had won us over with its hospitality and warm people. We had noticed a difference in mood as early as the border control post, and Magzoub in Abri only made the good feeling stronger. As it turns out, the surprises of Sudan had just begun.

We continued on to Atbara, and stayed at the best hotel in town. That does not say a lot, but it had aircondition and a very friendly owner, mr. Adel. We had decided to leave very early the next morning in order to make it to the Ethiopian embassey in Khartoum before it closed for the weekend. We needed another visa. But as we were about to leave at 0645 in the morning, Camilla’s bike would not start. Pressing the start-button only resulted in a clicking noise. We had to take out the tools. At first we thought the ignition relay – the source of the clicking noise – had given up, since our multimeter showed us a good voltage on the battery. But with the help of mr. Adel’s limited English and his friend on the phone, we determined that it was probably the battery that was the source of the fault.

Mr. Adel made another couple of calls, and 15 minutes later, two mechanics showed up to help us. Using charades, they explained us that the battery was indeed done for, and they went to fetch a new one. The wiring harness was adapted to take the new battery, which had the poles swapped compared to the battery BMW’s engineers had chosen in their infinite wisdom. Now everything worked. As we were ready to go, 4 hours late, mr. Adel asked us to join him for breakfast. In Sudan the eat breatfast around 1100. We had missed our opportunity at the embassy already, so why not? After a delicious meal with mr. Adel, his brother, and his son-in-law, we finally set sails towards Kahrtoum, reluctantly accepting that we would have to wait for a visa yet again 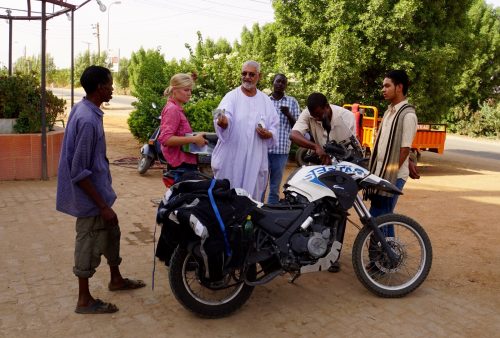 Mr. Adel, in the white gallabiya, with the mechanics.

On the way to Khartoum, we stopped at the Meroe pyramids. Not many people know that Sudan has twice as many pyramids as Egypt. The track to the pyramids was deep, deep sand. Going in, Camilla quickly fell over, but got up immediately with a big smile. After flipping her bike back onto the rubber, I tried to take it a bit further. And fell over. So now we both had the first spills of the trip. We decided that the sand was a bit too difficult for us and our heavy bikes, and kept going towards Khartoum. 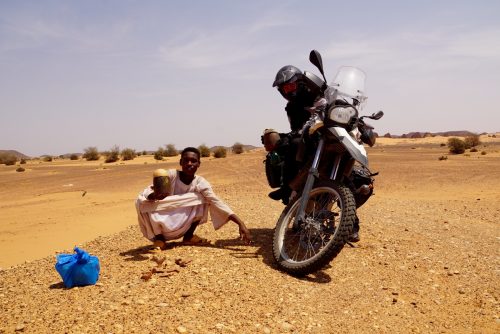 A young local guy sold us a clay chicken made by his mom. In the background, the pyramids of Meroe.

In Khartoum, we were met by Omer, our Couchsurfing-host. A great experience. We moved in with his family and were happy that we were too late for the visa, so we could extend our stay there. Omer was 22 and lived with his mother Amona, his brother Mohammed, 25, and his brother-in-law. Two of their five sisters also lived nearby. The house was a collection of small rooms connected to a central courtyard. Toilet and shower had their own small shacks. The only furniture was beds. In the courtyard was broked fridge. Everything was very primitive. As Mohammed said with a grin, “welcome to Africa.” 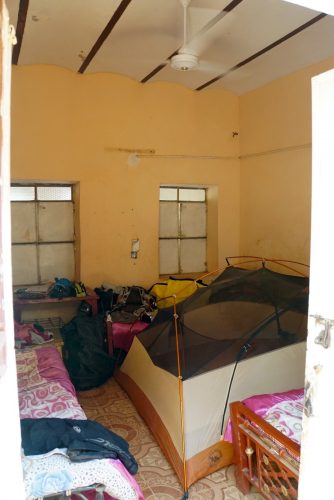 Our room at Omer’s. Camilla slept in the tent to avoid mosquitoes. 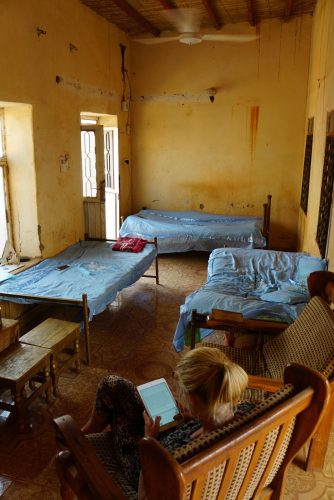 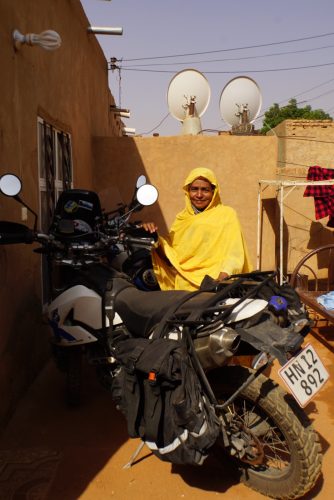 It is difficult to overstate how great it was to stay with Omer and his familiy. We spoke a lot about Sudan and the world in general with both Omer and Muhammed, who were both very knowledgeable about the world. Life is not easy in Sudan, which has recently suffered from a high inflation due to the South Sudan separation and western sanctions (as a side note, we were completely unable to withdraw money, as foreign credit cards do not work there – but we knew that, and had brought cash). Despite the dire situation, Omer and Muhammed were endlessly happy and optimistic. Omer planned to start his own company, and Mohammed wanted to go find a job in Saudi Arabia. They both wanted to visit Europe – Omer dreamt about visiting all countries in the world – but it was impossible for them to get visas.

Omer spent two days showing us Khartoum, the highlights being the religious ritual dance Halgt Zihr at the Hamed el-Nil mosque, and, strangely, the bus system. There are no real official bus sytems in Khartoum, so everybody travel by more or less legal minibuses. Each destination has its own hand signal, which even Mohammed and Omer was sometimes unsure about. You then wave the signal at every passing driver, hoping that someone stops or answers with another signal. At bigger busterminals, the drivers have people yelling out the destiations. It is a bizzare, extremely complicated, and inefficient system, but it was interesting to experience. 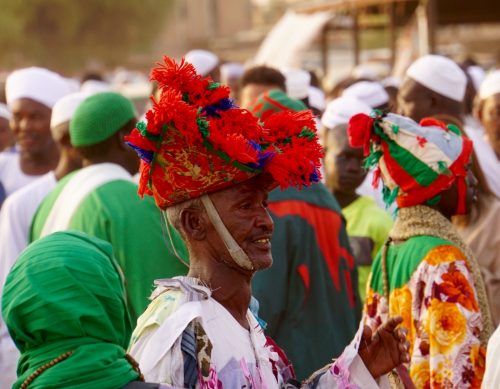 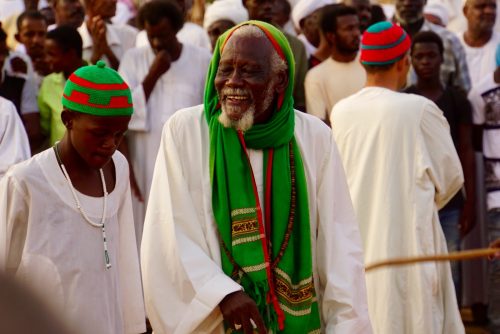 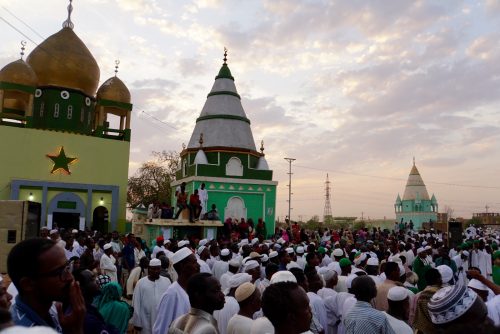 While we were discussing politics, religion, and pop music with Omer and Mohammed, their mother cooked us one delicious meal after another. She spoke no English, except “again, again!” when she wanted us to take another round of tea. Two of the nights, the sisters Neshua and Nuseiba dropped by and joined the conversation as best they could. Neshua was a lawyer, a difficult job in Sudan because you were always “against the government.” Nuseiba was a nurse, working jobs at two different hospitals, ran a family with three kids, and made henna-tattoos on local women. And then she had attended night school to learn some English. 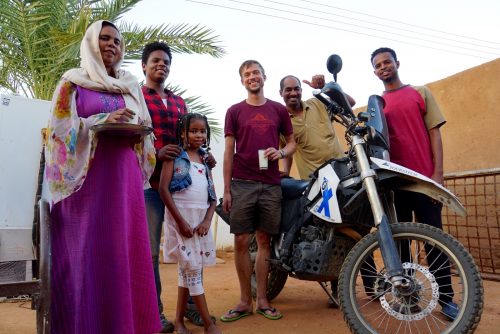 From the left: Neshua, Omer, Dania, Andreas, a brother-in-law, and Mohammed. 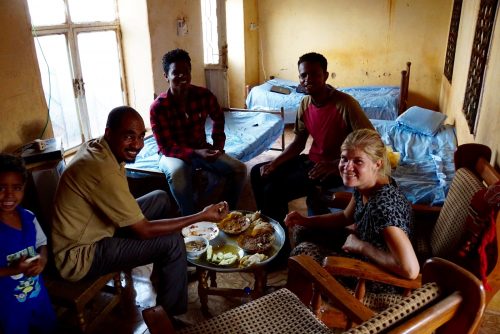 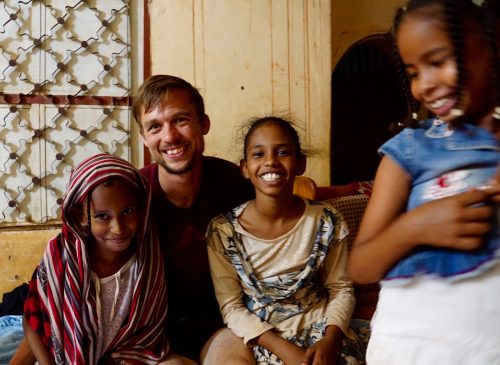 Our last night, everybody decided the Nuseiba should make Camilla a henna-tattoo, which evolved into a small party with all the grandchildren present, and we were put in traditional Sudanese clothes. Before we set out on this journey, Sudan had been the country we were the most nervous about, especially concerning security, but outside of Darfur, there are absolutely no problems. Even the crime rate is about the lowest in Africa. We give the country a definite recommendation, if you can live with the lack of traditional tourist attractions. 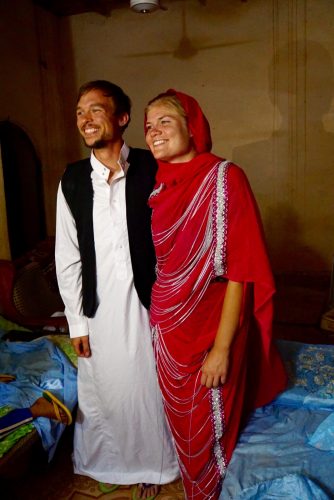 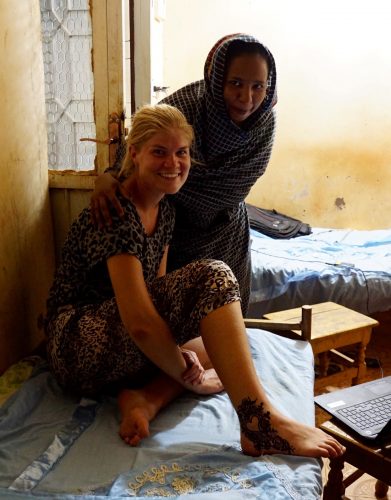 We really wanted to stay with Omers family, but had to keep going to South Africa. We went to the Ethiopian embassy with Omer and got our visas in only an hour and a half. We said goodbye and headed southeast. South of Khartoum, Sahara ended and the terrain grew steadyly more green. After a night at a horrible hotel (even though our standard are pretty low by now, we ended up sleeping in our tent in the parking lot) in the sad town Gedaref, we arrived at the Ethiopian border. 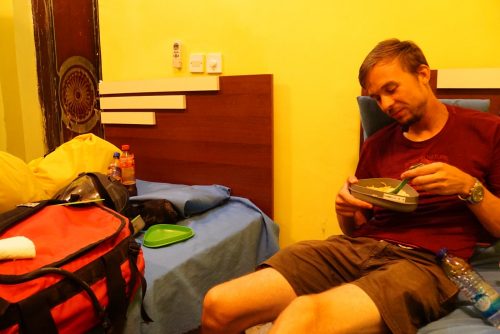 Dinner at the hotel in Gedaref, before the power cut out. 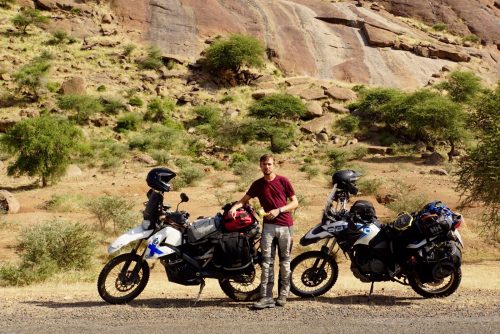 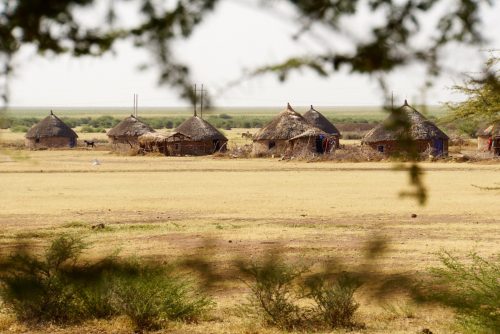 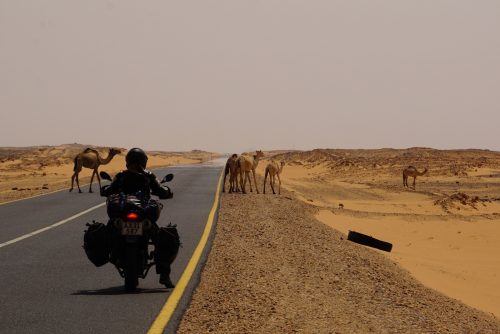 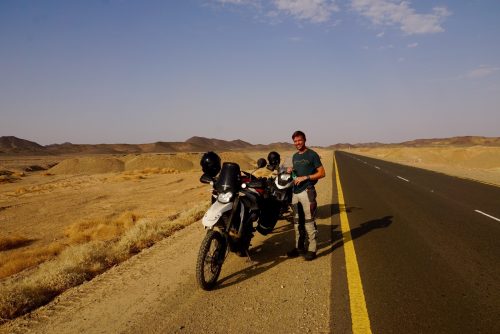 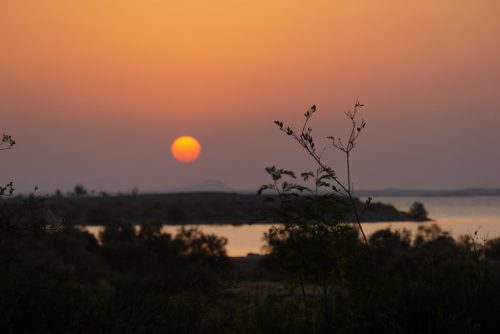 Except annoying black market currency dealers, the border crossing was easy – and free. After two and a half hours of bureaucracy and lunch, we left for Gondar, where we are now. The border marked a total shift in nature. We are now in a luch, green hillscape, which might as well have been southern Germany. We are happy about the temperatures, which are now at a comfortable 20-25 degrees. Almost cold, compared to the 45 degrees we’ve been used to for a month now. Our first impression of Ethiopia is not as good as that of Sudan, but that is also a high bar. The nature Here is beautiful, but the people do not seems trustworthy. But let us hold back judgement, we have another 6 days here before we cross into Kenya. 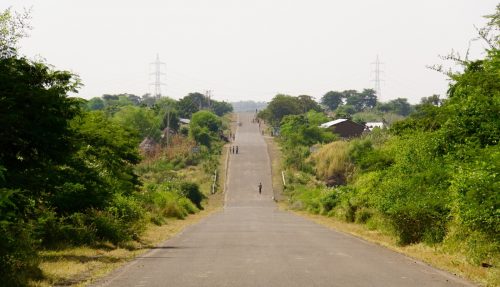 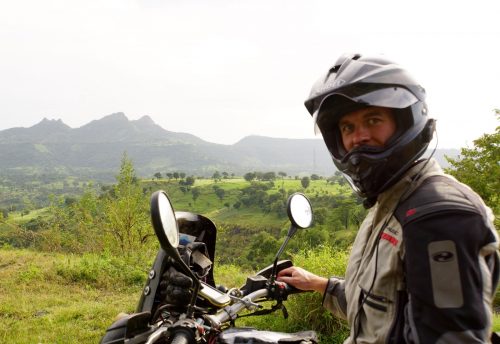