The sky was a beautiful azure color. The wind was uncharateristically calm at Cape of Good Hope, but the waves were still smiling at us with white caps in the deep blue ocean below. We had reached the end of the road, quite literally: At the parking lot under the Cape Point lighthouse, the road simply ends. We had hiked up the path to the lighthouse, taken a few pictures, and left one of our stickers. We decided to keep going and hike across to Cape of Good Hope itself. We had brought lunch, and I had asked Camilla to buy cake.

The final sticker of the adventure.

Seven months earlier, I was sitting in the dark of the night, trying to avoid supergluing my fingers to our dining table. I had procured a pack of assorted veneers on eBay and convinced Camilla that “I just wanted to check out the looks of various woods,” when the package arrived. I had selected a sheet of indian rosewood and a contrasting sheet of birch. In about a month, I would be leaving for a conference in Las Vegas, and then I would not really be home until we returned from Africa.

I found a few nights and mornings where Camilla would not be home, and crossed my fingers that she would not return early. I successfully bent the rosewood and hid everything, before she got back. A short while later, I laminated the veneer into small pipes, and again nervously stow everything away in time. A few days passed and I added a birch stripe and sanded everything down – and started over, as one of the pipes were too small. Camilla has a solid eye for lack of cleaning, so I was constantly afraid she would notice some sawdust on the kicthen floor. She must have taught me well, because my cleaning was so good, she never saw any. Even today, one of our kitchen cutting boards shows traces of glue, but strangely, she never commented on it.

After 6 wonderful weeks in the US, we returned to Denmark for at brief stint, before we set off to Africa. For a short moment I had completely forgotten, where I had hidden my works of art, which would have completely derailed my plans. I looked through my pile of climbing gear without luck, before I realized that I should search the only place in our apartment where Camilla has zero interest in looking: The box of one of my whiskey bottles. I smuggled the tiny pieces of wood from the Benromach box to the inner pocket of my motorcycle jacket. Our adventure begun with me having two finger rings in my pocket. 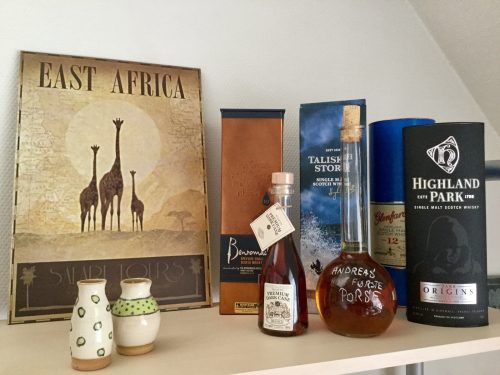 The whiskey shelf in Aalborg.

As we went, I rarely thought about the rings, but one day in Montenegro, we were caught in a torrential downpour. We had to stop, and just stood in the rain for half an hour, while the skies were emptying. We could not have been wetter if we had jumped in Kotor Bay below the mountain we were standing on. My jacket, and thus my pocket, was soaked. I could only hope the rings would hold up. I could hardly start waving them around in the tiny, shabby caravan we had borrowed to sleep in. A quick inspection, however, showed no cause for alarm. 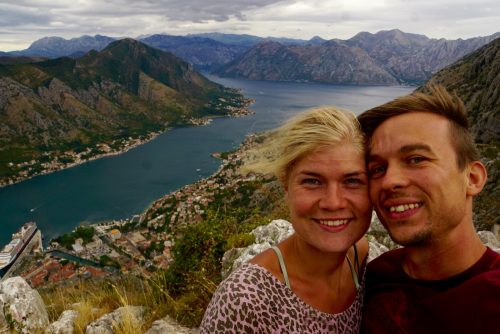 Montenegro, when it is not raining.

We kept going south and all went well, until my bike died under a coal truck in Malawi. Luckily, I managed to jump off, an with me came the rings. That episode led to a complete repacking of everything we carried, something Camilla was in charge of. She evaluated every little thing we had brought, all the way down to the spare wheel bearings. Fortunately, she never made it to my pockets. The rings stayed safe.

We reached Cape Town 5 months after we had left Denmark, despite all the challenges underway. We might have only had one bike left, but nobody had taken the chance to steal my jacket along the way, despite many opportunities. I’m sure my sincere effort to marinate it in sweat going through Sahara was a solid deterrent for any would-be thieves.

The morning we left for Cape Point and Cape of Good Hope, I deftly transferred the rings from my jacket to the left pocket of my pants. The rings had, like our relationship, survived all the struggles of motorcycling through the world’s wildest continent.

Cape Point is overrun by tourists, but nearby Cape of Good Hope is a short walk away, and thus more serene. I found a couple of rocks to sit on, and we had lunch. I might have been a little preoccupied in the conversation, while I considered exactly what I should do next. We made a couple of roastbeef sandwiches and tasted the cake, as a group of beaver-like animals decided to surround us. They wanted our food. Yelling or throwing rocks at them were of no use, and in the end we had to flee. I felt the romance of the situation slip through my fingers.

Camilla wanted to just eat as we walked back. I suggested we sat down again. The unwelcome animals quickly found us, and we had to move. Again. I sat down another place. Camillas patience grew shorter. She kept standing. Right around then, a sightseeing bus had arrived to the otherwise deserted Cape of Good Hope parking lot. Hordes of Americans were quikly approacing us. It was now or never. I took in the fantastic view. Thought about the name “Cape of Good Hope.” Grabbed the rings in my pocket. Smelled the sea breeze. Looked at Camilla. Dropped to my knee.

She said yes. One adventure was over and a new one could begin. 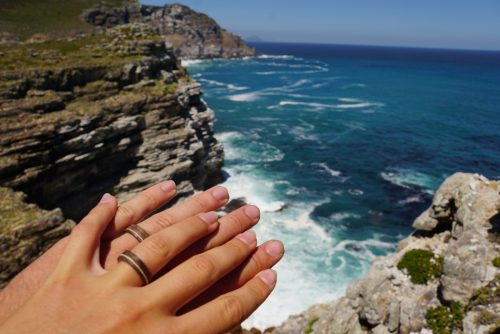 View from Cape of Good Hope.