The Acrux Expedition was a motorcycle adventure through Africa, which we – Camilla and Andreas – embarked on in the fall of 2016. The concept was simple: We wanted to ride from Denmark to Cape Town. Like many other big projects, Acrux has a rather complex history. We started out as two people, then we were one, and now we’re two again. In the end, we did make it to Cape Town, but not entirely without mishaps, which you can read all about here on this blog.

The idea was born in early 2012, which you can read more about here. Andreas decided to ride a motorcycle from Aalborg (in Denmark) to Cape Town. Anders, a good friend of Andreas, was quick to decide to join. We then spent af couple of years planning the expedition, and did a test-trip to Nordkapp. We expanded the route to also include Australia and Asia.

While we were both working on our PhDs – three years is a long time – life happened, and Anders decided not to join the trip after all. Andreas was not about to let the idea go, and thus decided to ride to Africa on his own. Enter Camilla. At one point during the past couple of years, romantic relations erupted between Andreas and Camilla, who reluctantly accepted that Andreas was going to do this thing. It led to a lot of worrying, until she realized that she could just join the trip!

So after all was said and done, the Acrux-expedition ended up consisting of Camilla and Andreas, who started riding their motorcycles towards Cape Town in the fall of 2016.

This website tells the story about our expedition, all the way from planning to us arriving in Cape Town.

We rode on two bikes – that’s the most fun. Camilla rode Felucca, a BMW G650 GS Sertao from 2014. According to her, the coolest bike in the world. Andreas rode Amelia, a BMW G650 Xchallenge from 2007, a bike which in the adventure riding community is known for its low weight, excellent fuel economy, and bulletproof Rotax engine.

The bikes are not the exact same model, but they have the same type of engine and share many spares. That means we have to carry less boring stuff than if we were riding completely different machines.

I was born and raised in Holstebro with my family – they’re the best thing in the world. With my brother, I’ve been a scout, folk dancer, and gone to school. As a kid, my great passion was horses – something I’ve unfortunately left behind (for now). I loved singing, having picnics, making bonfires, sleeping in tents, eating candy on Fridays, lounging in front of the wood stove, and being with my family and friends. After high school I traveled to Asia for six months to live in the jungle in Thailand, teaching kids English. That was a great time. Today, I’m studying medicine in Aalborg, I eat candy on Fridays, and love being social with my friends and family.

With the risk of not being completely objective, I think I can safely state that Camilla is pretty fantastic. She possesses an impressive curiosity and can talk to everybody she meets. She’s very caring and quite a people-person – something that can be difficult for an engineer like me. She burps a lot, but I can live with than. I have named her the expedition doctor, which is always a good thing to have. Also, she was cool enough to just decide to join me – “then I’ll just get a motorcycle license” – so I cannot imagine a better partner for this project. I’m really looking forward to experiencing Africa with her. 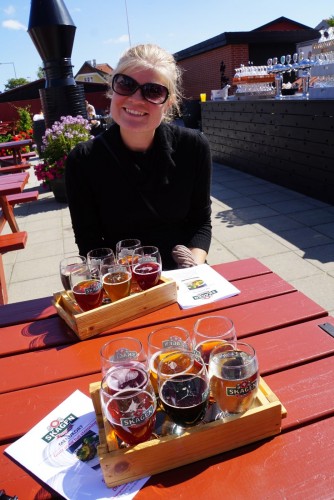 Until Camilla finds a better pidture of herself, here is one where she’s about to taste some beer.

I grew up in Arden, south of Aalborg, and went to school in Aalborg since 8th grade. Got my MSc in computer vision (and programming and stuff) in 2012, and have since received a PhD in the same topic, also from Aalborg. I was a soldier before going to college, and did a tour to Iraq in the mechanized infantry in 2006-2007. In 2011-2012, I lived for 8 months in San Diego, where I wrote my master’s thesis. I’ve been rock climbing in Aalborg Klatreklub since 2003 and still frequent the club several times a week. I like mango fruit, top hats, and libraries. Not necessarily in combination.

Andreas has handsome arms and eats lots of oatmeal. He possesses a unique patience, especially when teaching. He’s incredibly good at researching all sorts of (weird) things, and works sort of like an encyclopedia. He has a great passion for beer and books. Other than that, he can do almost anything: Tie a bow tie, change ball bearings, ride a unicycle, do the dishes, especially with the help of YouTube. There are two things Andreas is incapable of: Stress and nervousness, but that’s where I come in… 70% of his sentences are very well-thought-out, wise and cited with relevant sources, and the remaining 30% are silly quotes. Andreas’ eyes light up when he sees heavy construction equipment or a man with a top hat and monocle. I’m certain Andreas will make the trip to an through Africa completely unique. 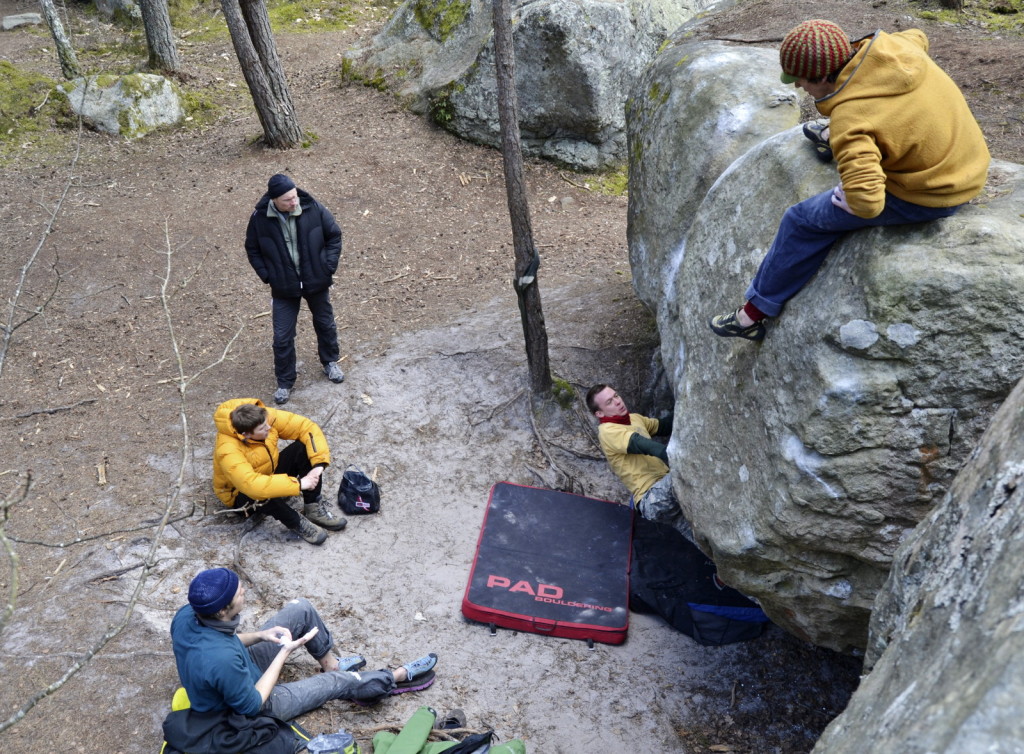 Andreas tries his luck on Action Directe in Fontaine Bleau (to no avail, but it was soooo close – next time, I’ll make it).

Anders is no longer part of the Acrux-expedition, but he has been an integral part of the planning and has written a number of posts on this site, so we’re leaving his bio here.

I used to build fortresses in Lego with as many traps as possible. And my (oldest younger) brother and I had a train set that we would build ramps for, drive it off cliffs. Once we made a bungee jumping platform but struggled to find a leash with the right tension for the weight of a Lego man. Skjern, my first home town, was great. Later we moved to Herning, a larger city also on the main land of Denmark, and I learned to play the guitar, piano, drums. My hair was long and I went to high school before moving to Aalborg to study. I had the pleasure of studying with Andreas for four of the five semesters we had in common. I’m now an engineer, MSc, of signal processing and acoustics and, at the moment, I’m having fun doing a PhD degree in acoustics. I lived in Canada, Germany and USA for parts of my studies.

Anders has over that past 6 years become one of my very good friends. He is the prototype of an absent-minded professor – something he no doubt will be one day – and I fear how often I will have to remind him of his gloves, or explain to him that he has once again forgotten to bring his motorcycle. Anders can be surprisingly extreme, contrary, and impulsive in his views, all of a sudden he decides to move to a cabin in the woods, become the world’s best pie-chef, or ride 100 km on his ancient pedal-bike. Usually, he just needs to be contradicted a bit, and he’ll come back down to Earth. Despite all this, I have accepted to do this trip with him, maybe because Anders is also one of the nicest and smartest people I know.

Andreas is a clever and calm guy. He seems entirely at peace with himself and his, carefully considered, prolonged decisions. Shy of conflict Andreas likes to seek compromise rather than promoting ideas of his own. He’s good at getting the gist of the ideas at hand to make the ends meet. Other times I find him frustratingly careless with little attention to detail. We’re different in many ways, but Andreas pursues and appreciates exploration, accomplishment, or just a moment or a nice place. For sure, we both want to do something out of the ordinary and spend years saving to go on this multi-continental adventure on motorcycles. So I’m lucky.

(don’t expect this view to be stable for the entire trip!) 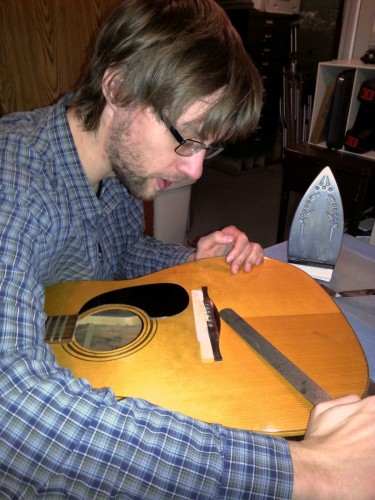 With steam heat and patience I removed the bridge on this old guitar which had been standing in a corner for 20 years. The strain of the strings had somehow bulged the surrounding woodwork, breaking the bridge in two. Repair still in progress. (at the house Anders lived in in Evanston, IL, USA)