… And then there was one

I originally wrote this post in June, but have not gotten around to post it until now, 3 months later. I’m sorry, but at least here it is 🙂

I’m sitting in a Boeing 747 on my way to Korea, the engines are humming loudly, and I’m caught in the no-man’s land of time which appears when the clock is showing past midnight in Denmark, it is morning in Korea, and the plane is somewhere in between, above western Siberia. In other words the perfect time to ponder the world and write a blog post for the much neglected blog. 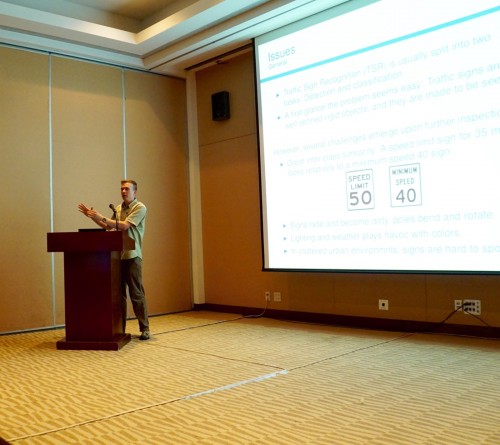 The reason I’m in Korea is to speak about traffic signs at the Intelligent Vehicles Symposium.

Not much has been posted here since last year’s trip to Nordkapp, but that does not mean that nothing has happened in the background. I might as well get the big thing out of the way first: Anders has decided not to join the trip. So now I’m just me. I’m not angry, it’s better for him not to come than to participate in something he would not enjoy. But it changes quite a bit. I still hope he’ll change his mind – I’d love for him to come – but I don’t think it will happen. I’ve spent a couple of months trying to persuade him, but he’s made up his mind. 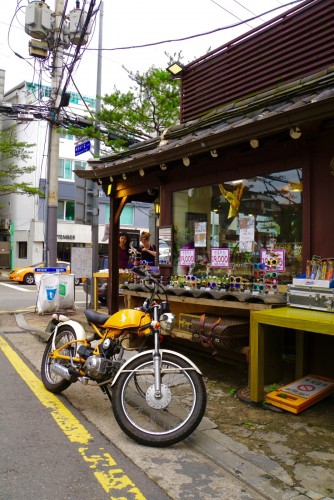 A cool motorcycle in one of the small streets.

So what does that mean? First and foremost: No matter what, I have to do something. I’ve looked forward to this trip for far too long to just give up. On the other hand, I want to cut down the duration. I don’t feel like travelling solo for 15 months, and I also now have a girlfriend who I’d like to get back to, before she forgets all about me. Furthermore, I have been invited to a wedding in San Diego at the end of July 2016, which would make a good limit for the duration of the trip. I’m employed at the university as a post doc (a researcher) until January. Thus, the time frame is January to July 2016.

But where to? It’s late here in the plane – whatever time it is – so I better get some sleep. We’ll look at that question later. 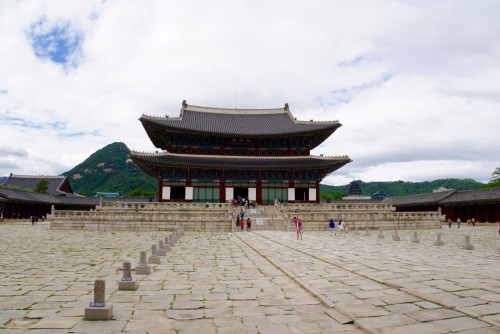 Gyeongbokgung, the main palace in Seoul, where the king lived for hundreds of years.

The hum of the jet engines has been replaced by a similar sound from the fan I’m in front of. A week has passed, and I’m in a restaurant in a hanok, a traditional korean house, working on an ambitious lunch consisting of a bowl of ice noodles – noodles cooled with ice and in this case very spicy – along with chulpan dak-bulgogi, a hot chicken dish with vegetables and mushrooms. I just hiked 8 kilometers along the 700 year old city wall of Seoul to the top of the mountain Bukaksan and back down, so I’m hungry. The route went through a heavily militarized area, upheld ever since a North Korean assasination attempt in 1968. 30 elite force soldiers tried to sneak over the mountain to attack the residence of the South Korean president. However, after a fierce battle with South Korean forces, they had to give up.

So did I, after fighting my chopsticks for a couple of minutes, and the waiter gave me a pair of scissors to cut my noodles in more manageable chunks. I thought I had a pretty good grip on chopsticks (pun intended), but noodles are still a challenge. 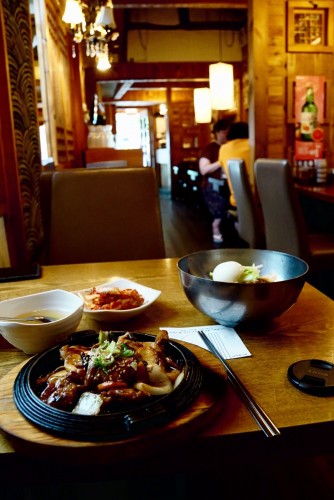 A well-deserved lunch after the hike over Bukaksan. 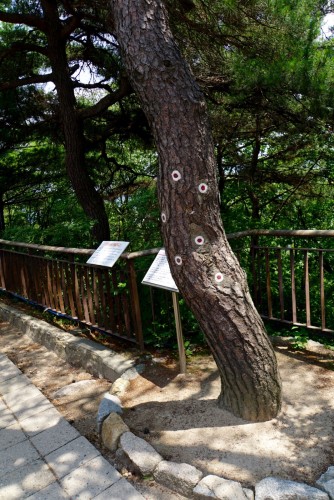 The tree where South Korean forces fought the North Koreans in 1968. Bullet holes are marked with paint.

Anyway. Where to? Since I’ll be travelling from late January, Europe is out of the questions. Even southern Europe can be pretty miserable at winter. Also, I’ve seen Europe already. South America, North America, and Australia are all impractical, since they would require me to ship Amelia both out and back. That is expensive and a hassle. If the criterion is one-way shipping only, I’m left with roughly two options: Ship to and ride home from either South East Asia or South Africa. In both situations, I’ll be able to follow the summer back to Europe. I’d prefer to go to Africa, and that also corresponds to the original plan from before Anders and I went overboard and added Australia and Asia to the itinerary. So Africa it is. 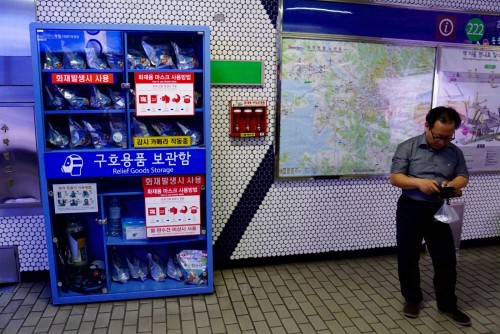 South Korea is a country ready for war – here with gas masks in the subway.

Is that possible? Most people sound quite sceptical when I mention the idea of riding a motorcycle solo through Africa. But then again, they also do that when I talk about doing it two people. I’ve spoken to people who have traveled Africa – most recently an Australian who traveled solo around the continent by bus for 7 months – and I’ve heard both sides of the argument. Both that I must be nuts, and that it wouldn’t be a problem. Two things comfort me: I’m certainly not the first one to do this, and there will be plenty of other globetrotters the same route as me, who I can tag along with. And worst case scenario: If I hate it I can do a couple of trips in South Africa and then go back home. I’ll bring a Spot satellite tracker, so you can all follow along. 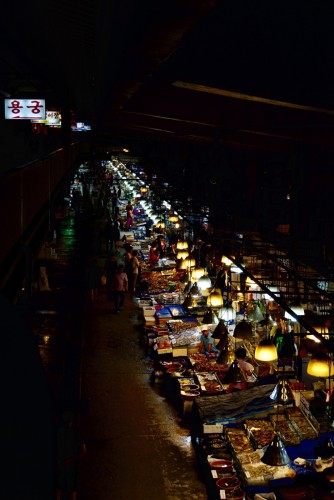 Apart from the weather, there are a couple of other advatages of going south to north. The most difficult border to cross seems to be Sudan to Egypt, and with this route I will have crossed a dozen other African borders before then to help me learn the ropes. At the moment it also seems that the best (well, only) way to cross the Mediterranean is via Israel. Sudan does not allow travelers with Israeli stamps in their passport to enter, so by getting to Sudan before Israel, that issue solves itself. 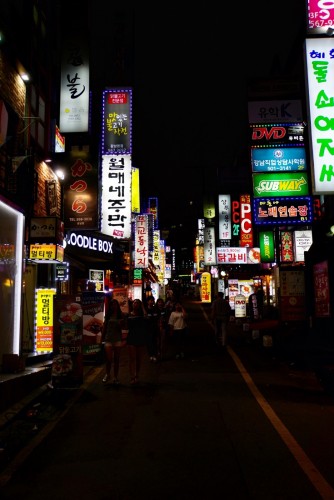 A street in Gangnam.

Meanwhile, back here in Seoul, I’m almost through my noodles. I’ll go explore Insa-dong and find a couple of good souvenirs to bring home.

Third and final hum in the post is brought to you by one of Seouls metro trains. Another day has passed and my trip is almost at the end. I’m on my way to the airport, quite tired after having hiked up and down Baegundae today, the highest peak in the Bukhansan national park just north of Seoul. The park has the world record in yearly visitors per square foot, but it was not too crowded today and I had the path to myself most of the time. 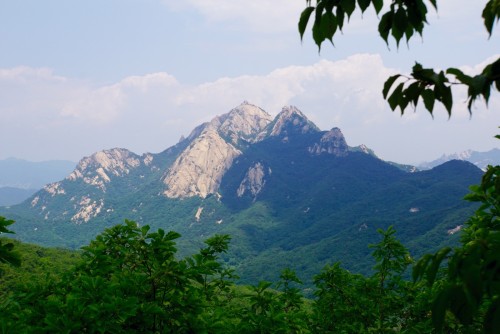 The peak I hiked to at the final day of the trip. 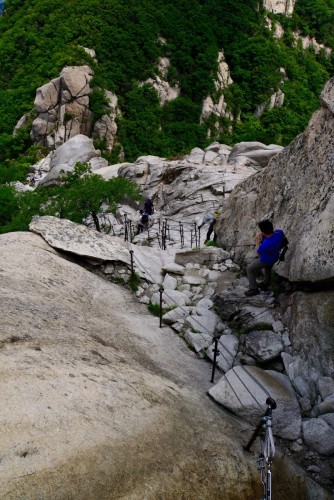 Scrambling down from the top.

Let me finish by touching on a couple of other things. I’ve figured out which vaccines I will need for travelling throughout Africa. Thanks to the Danish Army, I have some of them already. I have also ordered a new Hyperpro suspension for Amelia, but it has been underway for nearly 5 months now, so we’ll see if it ever gets here. I haven’t paid anything yet. Finally, I also have to divulge that Anders bought another motorcycle, even though he is not coming on the trip. I don’t think he has given up on Bob completely, but it has been disassembled for months, so to have something else to ride he bought another BMW – this one from 1979. I don’t see how that could go wrong…

That’s it for now. The train will arrive in 5 minutes. I have to begin researching freight prices to South Africa whenever I get time!

Seoul is a large city…