All tales start by establishing the characters, and one of the most important ones in this tale is Amelia, my motorcycle. More on the name towards the end. Amelia is a BMW G650 Xchallenge from 2007, which I bought used with 7500 km on the odometer by the end of July, 2013. I rarely buy anything by impulse, and this choice was also made based on careful research. Despite that, until 5 days before I rode her home from Copenhagen, I planned to buy a Yamaha. 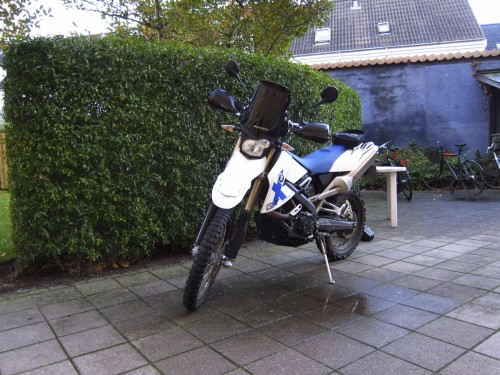 Amelia in the courtyard where I live.

My research started almost right after we decided to do the trip. Having never had any kind of experience with motorcycles, after innumerable hours of studying Advrider and discussing with Anders (who rarely agreed with me), I arrived at some kind of shortlist:

Other candidates, such as Honda’s Africa Twin or BMW’s F800GS was also considered, but fell for different reasons: Weight, fuel economy, age, price. I even flirted briefly with a fully rally equipped KTM 640, which showed up for sale. Any kind of motor vehicle in Denmark is ridiculously expensive due to a 180% tax on the price, so I was certain I wanted a used bike. That also meant that I counted on finding something on the rather small market for used dual-sports in Denmark.

Once in a while a Tenere showed up, and it seemed like a really solid choice: Fairly new design, robust, possibly on of the few bikes ready to go around the world without modifications. I was not that sold on BMWs which in many cases seemed to be bikes that looked the part, but wouldn’t hold up in reality without a lot of modifications. On exception, though, seemed to be the Dakar, which, while no longer in production, is one of the more rugged BMWs. They were also used by the Danish Army up through the 2000s, and strangely for a guy who have been to the army and used some of their crappy gear, that earned it a stamp of approval from me. Very few are on the market in Denmark, though (or anywhere really). 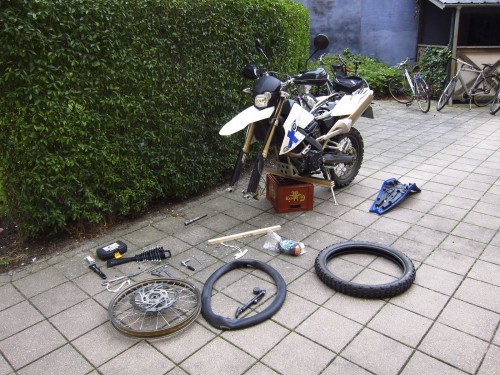 One day on my way to the climbing gym, Amelia’s front wheel had a puncture, so my next course of action was to learn how to fix that.

Behind it all, the Xchallange was hiding. Heavily recommended by legendary Walter Colebatch of Sibirsky Extreme, low weight, good economy, and a bulletproof Rotax engine were all points in favor. However, it was expensive, it is very rare in Denmark, and it was clear that, unlike the Tenere, it would need a host of modifications to work. I had no doubt that it could become the ultimate machine for me, but with the cost of modifications, I needed to find one significantly cheaper than a Tenere, and I had all but decided that was impossible.

This is where the small Danish market for dual-sports came to my rescue. While it meant a small selection for me, it also meant a small selection of buyers for the ones that were on the market. One, which was nearly stock and had only driven 7500 km,  was put up for sale in Copenhagen for 65.000 kr (~$12000). A fair price in Denmark, but too expensive for me. Over a couple of rounds it was lowered to 50.000 kr ( ~$9200), and I jumped on it – literally. Took a train to Copenhagen and rode it home the same day. I’ve been happy about that purchase ever since.

With Amelia secured, I started taking a closer look at modifications, first by reading all of the the humongous X-Challenge Accesories/farkles-thread on Advrider. Before long, I had packages inbound from places like England, Holland, Argentina, Germany. Luckily the Xchallenge is so popular in adventure circles that great accessories are easy to come by. 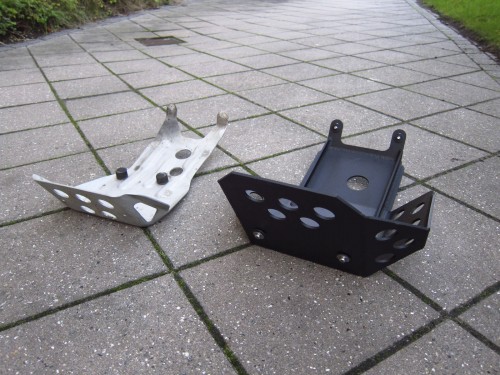 BMW and Scheffelmeier bash plate compared – the difference in quality is evident.

From Germany I got a better bash plate and a proper case saver. 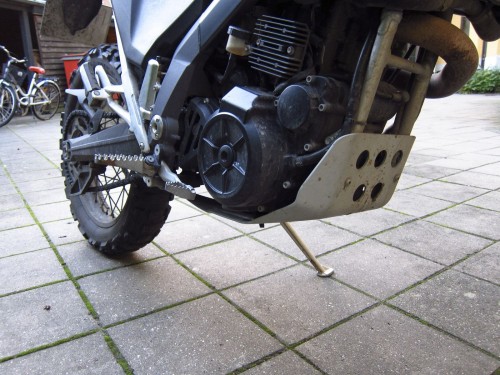 Amelia with the original bash plate. 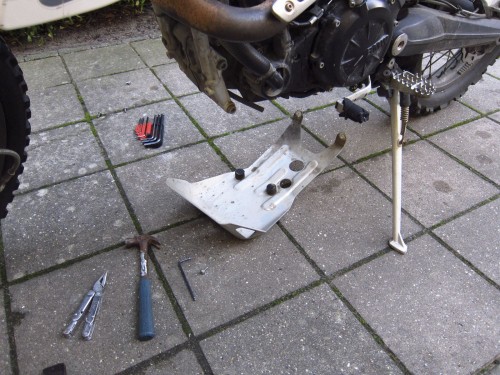 After fighting with a screw with a messed up drive, I managed to get the original plate off. 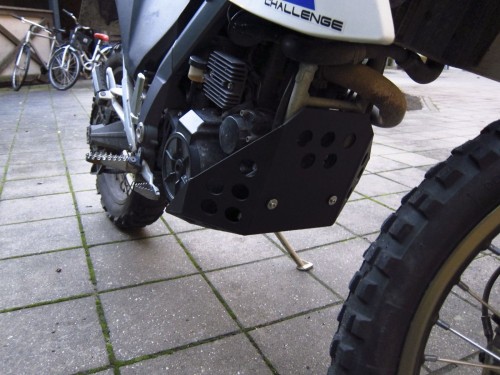 And Scheffelmeier’s were put on. Much nicer. 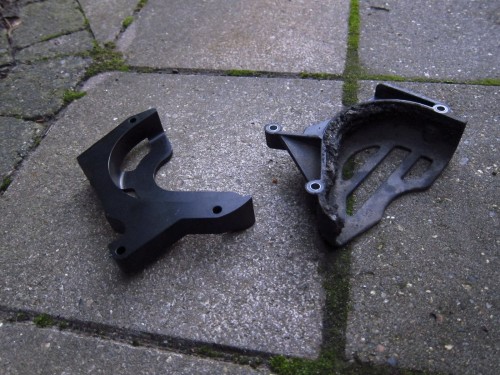 The new aluminum case saver next to the old one made from useless plastic.

The Xchallenge was born without a windshield, so I had to add one of those as well. I considered a full rally fairing from Hot-Rod Welding, but the price was too high for me, and it would probably have been overkill anyway. Instead I found a nice Dakar-shaped windscreen in Argentina for a fraction of the price. 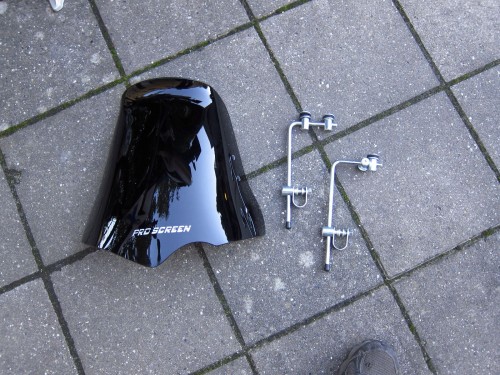 Windshield so trips a highway speeds are bearable.

Even though – or maybe because – the Xchallenge has a good fuel economy, its tank is rather small. If you want to cross Austalia you need a proper range. Luckily, the very well-designed Xtank from Hot-Rod Welding in Holland exists. Made to sit over the rear wheel on the side without the exhaust, it basically looks like it has always been there. 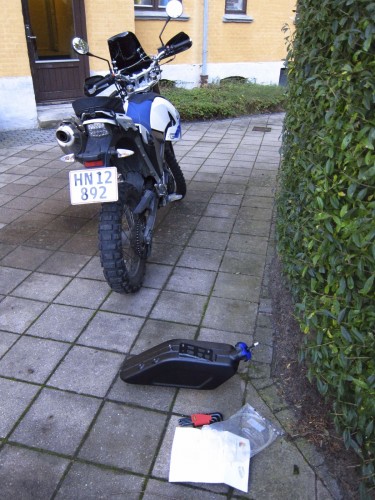 I also received an Xrack from Hot-Rod, so I could mount some bags. A few months ago, after careful research and deliberation, I decided on soft bags rather that aluminum panniers, and bought some Magadan bags from Adventure-Spec. 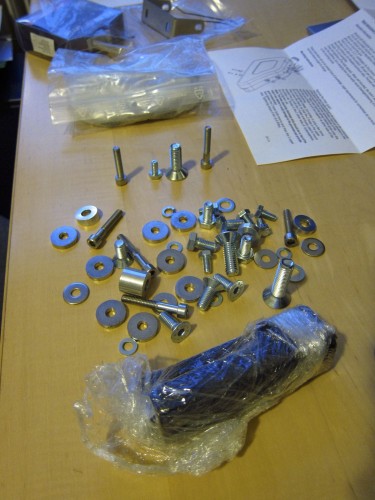 Now, the challenge was to sort out all these screws and mount the Xrack. It turned out to be easy enough. 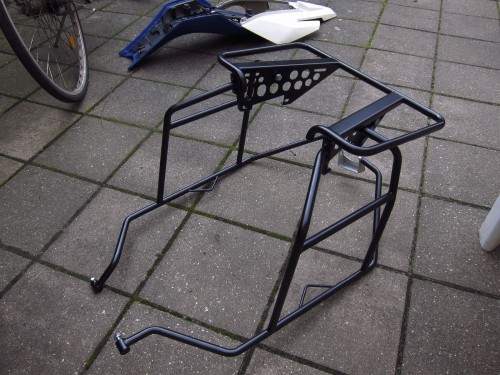 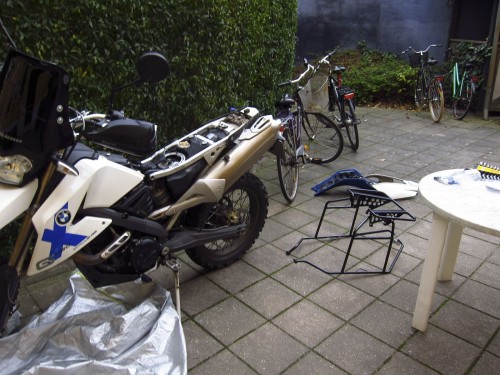 Amelia without seat and plastic, ready for the Xrack. 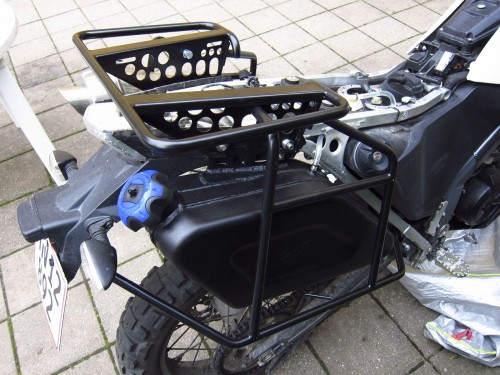 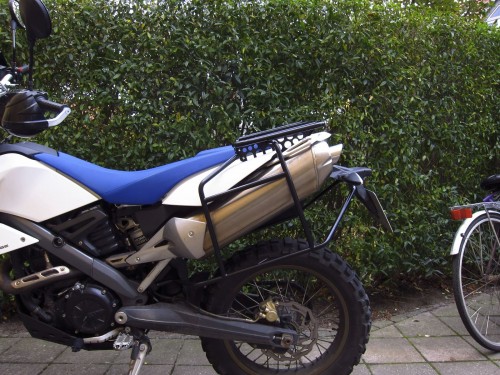 I’ve done a few extra things: Added Barkbusters hand guards, hard parts from Hot-Rod, and as the astute reader might notice, extended the mudguard. I couldn’t bring myself to pay the outrageous price for the Touratech extender, so I bought a standard no-name mudguard locally, cut it to fit, and mounted it with four bolts. I think it looks just fine, at a tenth of the TT price.

For now, I have decided I’ll probably keep the suspension stock. Changing is is going to be expensive, and with my rather limited experience, I’m not sure I’ll appreciate the difference. I’m considering adding some auxillary LED headlight(s), and I also have a short list of Touratech parts I need to add. Finally, I don’t think I’ll keep the original color scheme, but have not designed anything else yet.

Oh, yeah, the name. Any important vehicle must have a name, and preferably a girl’s name. I thought about it for a long time, but the answer was easy. I needed a female adventurer, and the flight pioneer Amelia Earhart seemed a good choice. Let’s hope the bike doesn’t disappear over the Pacific under mysterious circumstances.