I am currently in the US, and if there’s a place in this world that was made for motorcycles, this is it. Before I went here, I considered whether I should buy a bike over here, and as the date of departure closed in the answer became clear: Yes! Not only does the US work better if you have some transportation, it is also a good oppotunity to practice some offroading, which is hard to do in Denmark.

The question was whether it was realistic to do on a budget that would allow me to other things than ramen noodles. Obviously, I was after a pre-owned machine, and a terrain capable one. Fortunately, they are fairly common around here, so I posted a message on Adventure Rider and asked if anybody had an extra machine in their stable. Tom did. 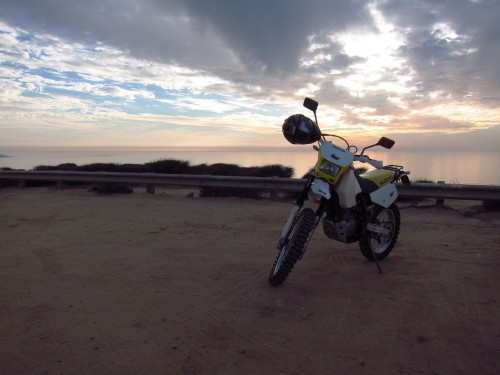 Tom is in the navy and lives in San Diego, and not only did he have a bike too many, he was also willing to buy it back from me after my six months, so I won’t have to search for a new buyer in panic before I leave. Pidge, as I have named her after Amelia Earhart’s little sister, is a Suzuki DR350 from 1999. That means that she is twice as old as Amelia, but still only half as old as Anders’ Bob. As the name indicates, we’re looking at a 350 cc engine, versus Amelia’s 650 cc. However, Pidge is a bit lighter and the engine easily handles freeway speeds, even though the gearing is happier at lower off-road speed. 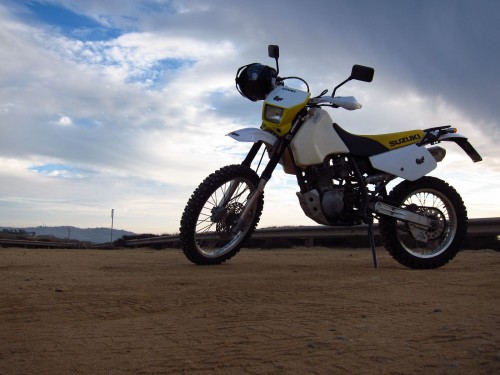 Pidge was Tom’s seventh DR350, so he has quite an expertise with these bikes – and he also had 8-10 other bikes of various makes and models in his garage, so he was happy to clear some room. This expertise has resulted in upgraded forks, suspension, exhaust, handlepar, and fuel tank. It’s an off-road model which means she has a better carburetor than the street-version, but only has kick-start. I’ve quickly gotten used to that, and she usually starts after 2-3 kicks. 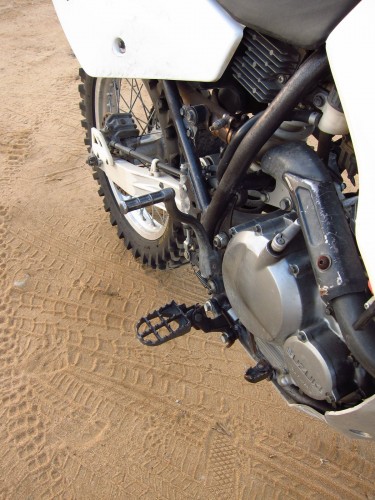 The kickstarter (about 8 inches over the foot peg)

I have not yet had he opportunity to do a longer ride, but yesterday I had a nice 4 hour trip out around Ramona on the most twisty roads I could find. I plan to do some weekend-trips, and perhaps take a week off of work for a longer trip. Furthermore, Tom has promised to introduce me to the local off-road routes, so I can practice there. On Tuesday, I’ll have my California driving test, and thus all the paperwork is done. I’m very happy. It was certainly worth the trouble of bringing all my MC-gear from Denmark. 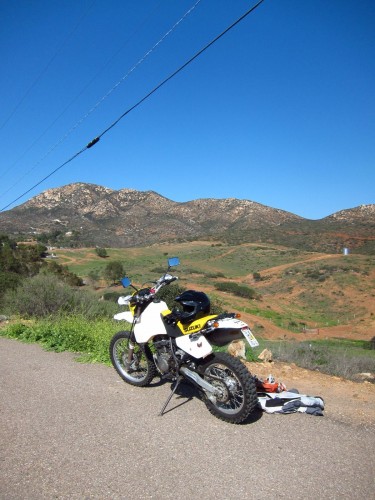 Pidge and I on trip. Iron Mountain in the background. I tried and failed to find a track to the top.