Dropkick Murphys - Shipping Up To Boston

We looked at each other. “So… Do we just go inside and say that we have to motorcycles we need to get to Africa?” It was the first time any of us had tried to arrange transcontinental shipping, so we were quite out of our comfort zone. I opened the door to Minoan Lines and walked towards the receptionist with heavy makeup. “Uhm, we have kind of a weird question, we would like to have to motorcycles shipped to Africa…” She barely looked up, and pointed at a glass door. “Go there.”

When we arrived in Athens, the first order of business was to sort out shipping to Africa. There is a ferry across the Gibraltar strait to West Africa. We want to go to East Africa. Before Libya fell apart, it would have been possible to cross at Gibraltar and ride along the northern coast to Egypt. That doesn’t work anymore, unless you want to brave a civil war. Another option was the ferry from Iskenderun in Turkey to Port Said in Egypt. But it stopped sailing a couple of years back. Those were – as far as we know – the only possible ferries. Shipping by freighter was our only option. 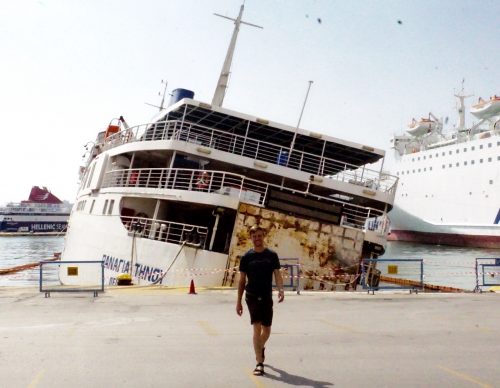 Something is off about that ship… Luckily it’s not ours.

Giorgos, who we stayed with in Lamia, was clearly sceptical about that idea. So was Nico, who we stayed with for a couple of nights in Athens. And truth be told, we were a little worried that the shipping companies would not bother with such a small cargo. Our only lead was a detailed blog post from last year, where a German family described how they had shipped their Land Rover to Africa.

We opened the designated door and entered a cramped office with 6 desks, 5 of them unmanned. The remaining shipping agent were on the phone, so we waited politely. A few minutes later, a friendly man appeared from another door, and asked us if he could help. The boss, it turned out. We explained the situation and were immediately invited to his office. “Egypt, you say? Alexandria? When do you want to leave?” 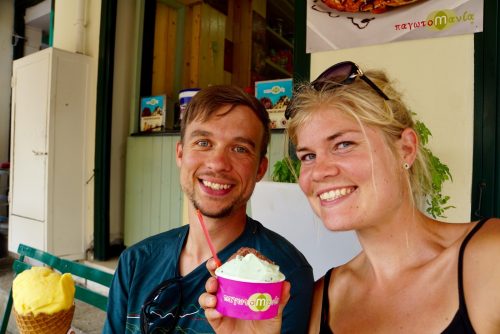 All our worries were completely unnecessary. It was clearly not the first time Georgos had coordinated a shipment, and he patiently answered all of our many questions. Even better, he had no less than two RO/RO ships leaving for Alexandria this very week. RO/RO means roll-on/roll-off, and they are used for shipping vehicles without needing to stow them in containers. We could not sail along with the bikes, but we knew that in advance and were prepared to fly. After about half an hour, everything was organized, and we agreed to return with the bikes two days later, to do the paperwork and put them on the ship.

As we left, it was hard to contain our excitement. True, the bikes were still parked in Athens, but we had a clear plan. We had expected a Kafkaesque nightmare between office doors and shipping companies, but it all worked out right away. We spent the rest of the day, and the next, seeing antique Athens. 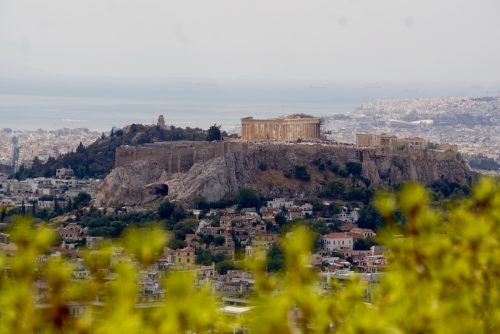 The view to Akropolis from the Lykabettos hill, the highest point in Athens. 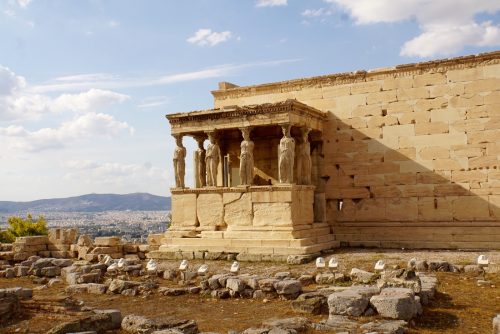 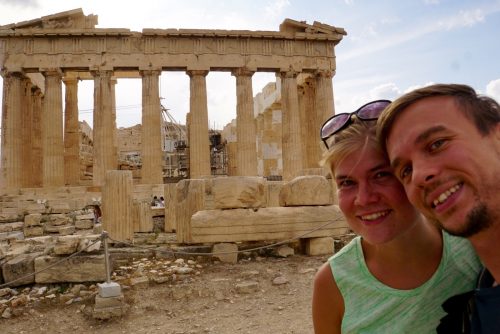 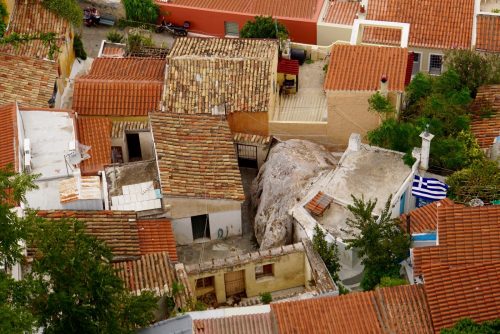 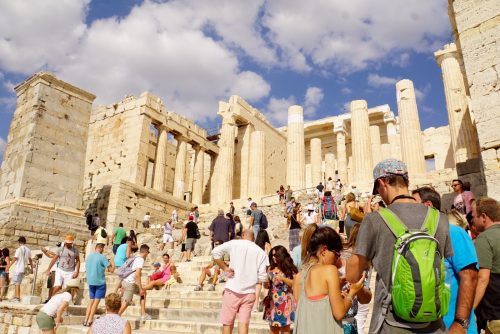 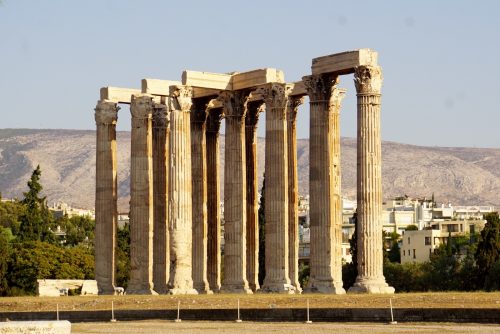 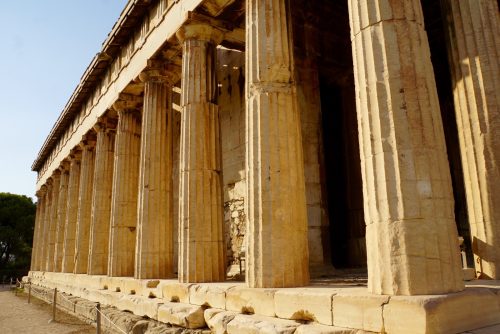 Marble columns with a roof. 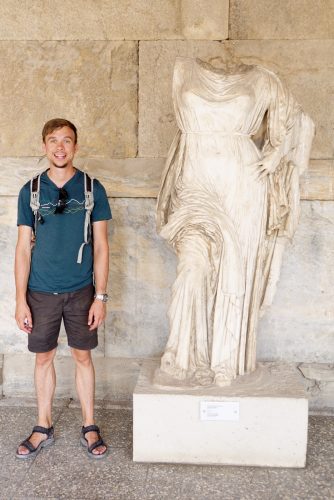 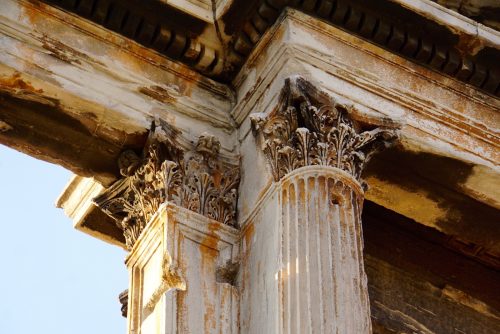 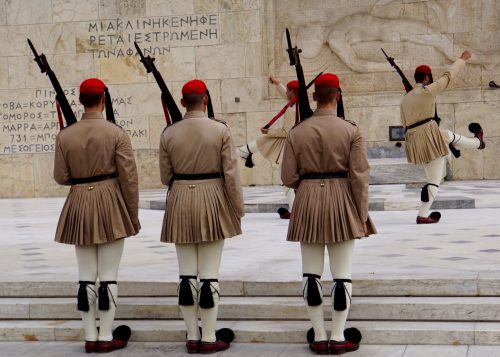 Change of guards at the Tomb of the Unknown Soldier in Athens. 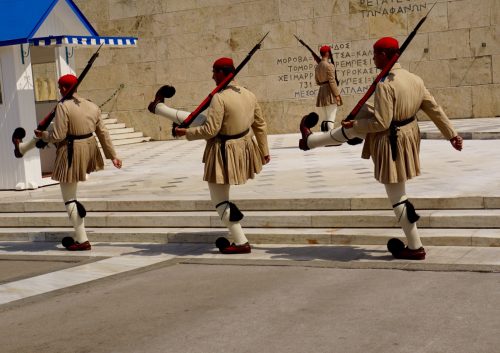 Athens seems like a city which has given up. 35% are out of work, and the poor economy is evident, both at the personal and governmental level. Everything is very far from Northern Europe. That was also the case in Albania, but at least it seemed like they tried. Many buildings in Greece are left to deteriorate, and beggars are a common sight. The antique heritage, however, is still there, and the old temples are amazing. But I don’t think it’s a city we’ll return to anytime soon. At a certain point you have seen enough marble columns. 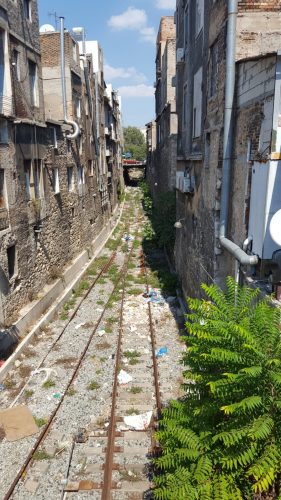 A little piece of Athens from the Lykabettos hill. 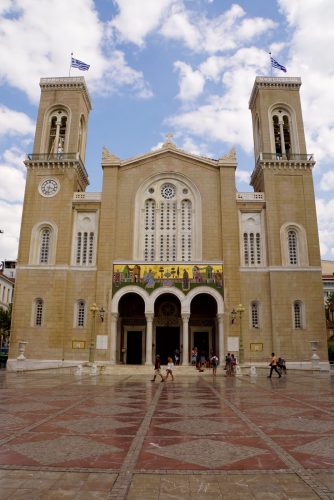 Yesterday, we went to the Minoan Lines offices at 9 as agreed. They were closed. We had done our part, so we sat down and waited. Only a few minutes passed, and the receptionist came walking nonchalantly along the sidewalk and unlocked the doors. She disappeared, and we only saw her 15 minutes later, when she had applied her war paint. But the office was fully staffed and in no time, as shipping agent were doing on our paperwork. Half an hour later, we were out 886.48 euros, but in possession of a Bill of Loading for two motorcycles. And then the circus began. Thinking back now, everything ran smoothly and relatively straight forward, but in the middle of the fray, it was a little difficult to keep track of events. We were sent to Customs Building 6 at Terminal G2, 5 kilometers away, armed with a name and a phone number for a customs agent. 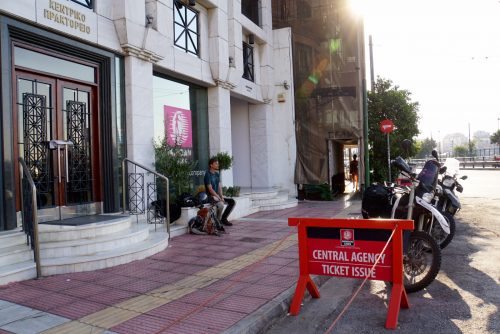 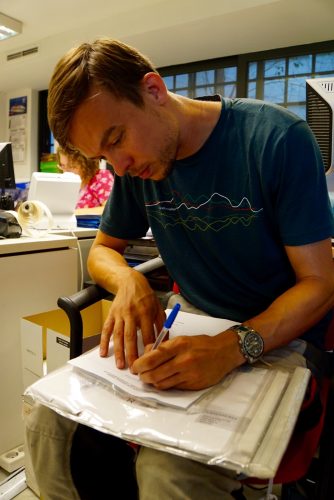 As soon as we rolled into the parking lot, we were greeted by Michalos, who guided us through the export process. He held our hands all the way through until we left the bikes near an enormous white ship from Neptune lines, but was not always very informative. First we went to a closed barrier and had our VINs checked. Turn around, back out. Went to the customs office in another part of town. Things had to be signed and our Carnets (kind of a passport for the bikes) filled out. It took a good half hour, but after the first signature, Camilla and I just sat and played cards, while Michalos ran from counter to counter and collected stamps. And the latest gossip. Then back to the barrier from before, which could now magically open. Park the bikes, hand over the keys. And that was it. 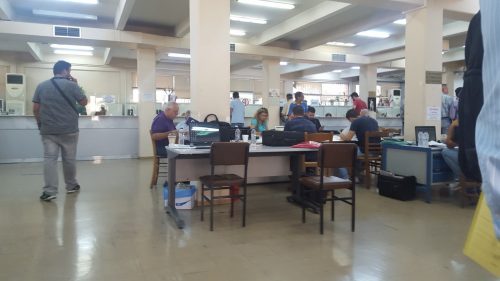 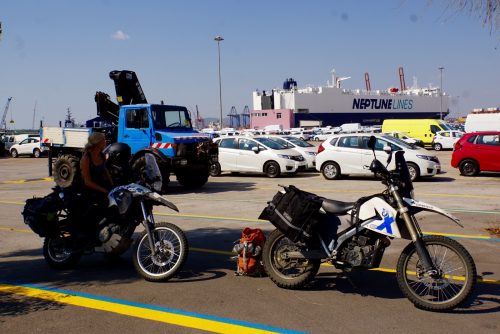 Last night at 11.50 pm, we flew to Cairo. After a thorough repacking before departure (Camilla is fantastic), we managed to fit our valuables into our bags for the plane, and left only relatively cheap and easy-to-replace things on the bikes. Everybody says that dock workers are a thieving bunch.

Now we’re sitting in the beautifully decorated lobby of our hotel in the Islamic old town, planning what to see in Cairo the next couple of days.

Now we just cross our fingers, that the bikes are in Alexandria in three days. 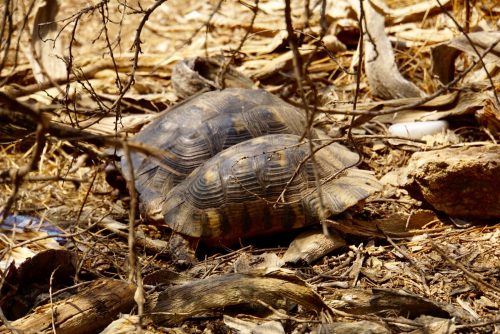 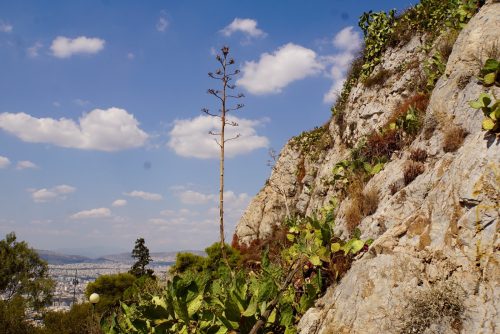