Hightailing it through Mozambique

The frenzy had begun. The truck in front of me was breaking. To my right, a shaking semi was trying to overtake me and the rest of the line. In front of him was a metallic blue Honda Civic with the bass thumping through the open windows. Toyota Hilux pick-ups were sprinkled throughout the hundreds of trucks on the road. Behind me the 25 year old campervan was trying to keep up. The engine had probably always been underpowered, but a quarter of a century of wear had not done anything good to it.

Relieved to be through the biggest pile of paperwork about my crushed bike, we had left Blantyre in Malawi. Heavily loaded, we crossed into Mozambique and arrived at Tete, the north western main city. We camped at a small campsite at the Zambezi river, and I was in the middle of reading a political analysis of Donald Trump’s white house appointments, as a completely normal, somewhat rag-tag campervan rolled in beside us. With French license plates. A completely normal, even boring, sight in Europe might as well have been a space ship here at the bank of the Zambezi. The campervan, which would prove to mean a lot for our future travels. Bernard and Colette debarked.

Only a few minutes later, we had been invited for white wine and peanuts. Bernard and Colette had retired early to go explore the world, and after exploring South America, they had bought an old campervan in France and shipped it to Namibia. We heard about their trip, and told them about ours. It turned out that we were going the same way – south through Mozambique. They offered us to go with them. Then they could take our bags and Camilla, so I could ride the motorcycle properly insteand of trying to balance a 400 kg beast. We happily accepted, especially since Camilla had been quite worried about crossing the rebellious central provinces alone in a military convoy. 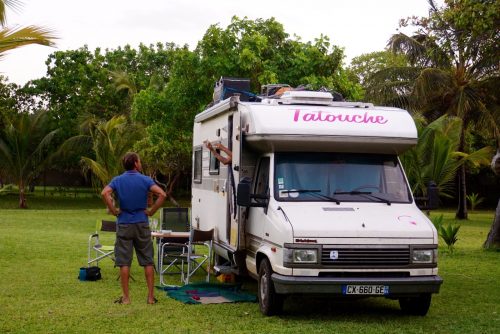 The government of Mozambique does not quite have everything under control. As always in Africa, the situation is murky. An insurgent group called Renamo has been making trouble for the allegedly democratic Frelimo-government the last six months. Renamo is an organization originally founded by Zimbabwe (then Rhodesia) in the seventies with the express purpose of destabilizing Mozambique. In the eighties, they were one of the parties in a civil war. They are still active, but have since them tried to establish themselves as a legitimate opposition party. The rumors says that a few hundred millions dollars of development aid has disappeared in the hands of the government, so lately Renamo has had a bit of a resurgence. This has resulted in a few attacks of trucks and busses, so there are some roads which can only be traveled under military escort. We had to pass two of these.

We set out from the campsite at 0600 the following morning to reach the early convoy at 0800. This convoy covered no less than 250 kilometers and detarted twice daily. We arrived at the staging area and slowly rolled up to the front of the line to hopefully find somebody who knew how things worked.

As we passed by the snake of parked trucks, I realized that this convoy – like most other convoys in Africa – was a joke. I am no expert in escorts, but have done a few in Iraq. Clearly, it is impossible to protect 150 trucks in one convoy. The line streched over 3.5 kilometer when stopped, so I have no idea how long it must have been when it was rolling. And just as I had suspected: Our “escort” consisted of a single police car with two police officers. For 150-200 trucks and cars. In Iraq we would usually escort 10-15 trucks with 4-6 vehicles and at least 20 soldiers. The only thing this convoy could do was make a convenient target for any insurgents. 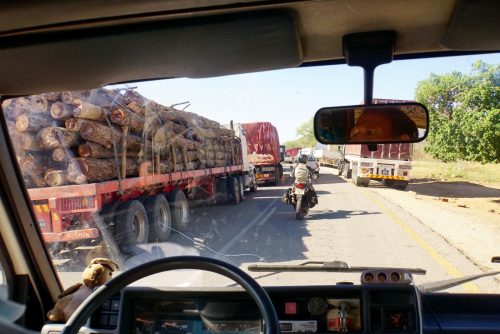 Trying to reach the front of the convoy before departure. 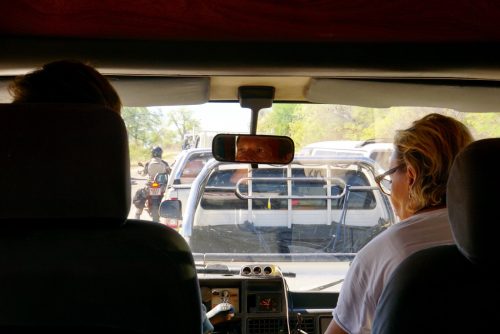 At least we left almost on time. The discipline among the escorted vehicles was non-existing and everybody attempted to overtake everybody else. If we had been able to stay with the cars up front it might have been better, but with the weak engine of the camper, we quickly dropped down among the faster trucks. It was worst the first hour or so, until people settled into positions. Except a couple of truck wrecks, we saw no evidence of rebellion. After a few hours and a couple of unexplained stops, we made it to the end. We kept going a short while and camped at a cozy lodge at a lake. 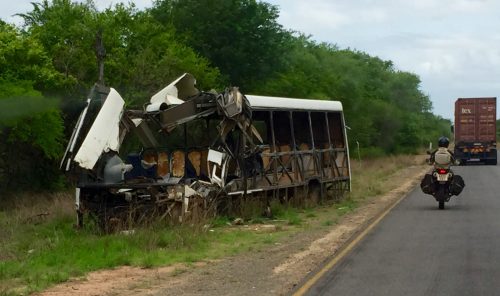 The following day was without any escorts. Bernard and Colette wanted to visit the Gorongosa National Park, and we were happy to follow along. The guard denied me access to the park on my motorcycle – citing a risk of lion attacks – so I parked it behind his shack, and jumped in the campervan. We spent the afternoon with a good lunch buffet, relaxing at the pool, and a three-hour wildlife drive in the park. Our guide was a young South African with fancy hair, but it was his last game drive (the park closes for the season in mid-December), so he was determined to give us a good experience. And he delivered. We saw water buck, elephant, impala, and many other animals, but the high point was a lion family in the dusk. The lioness had just hunted down a warthog for the three cubs to eat. An amazing sight. 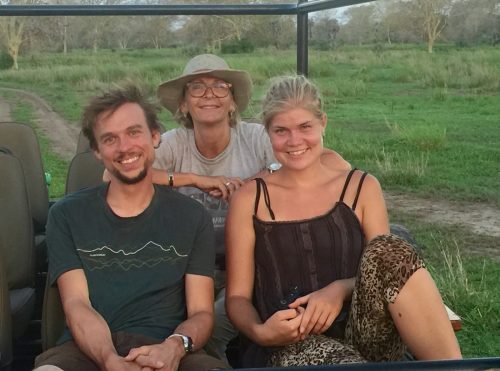 Colette and the two of us (I really need a haircut…). 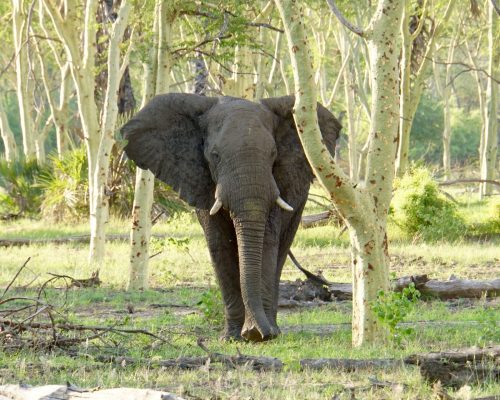 This elephant bull marked its territory by mock-charging us, trumpeting, and waving its ears. 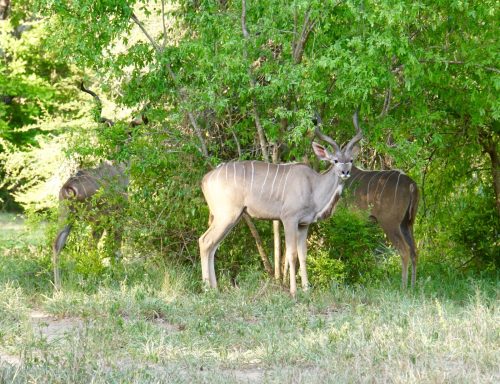 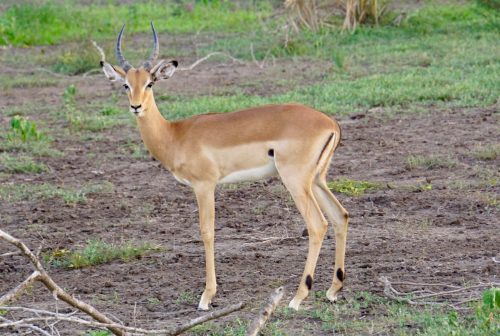 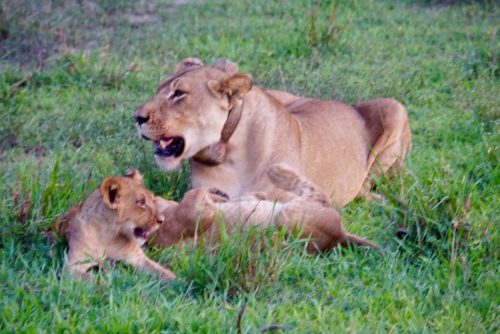 The lioness out of breath after catching a warthog for the cubs. 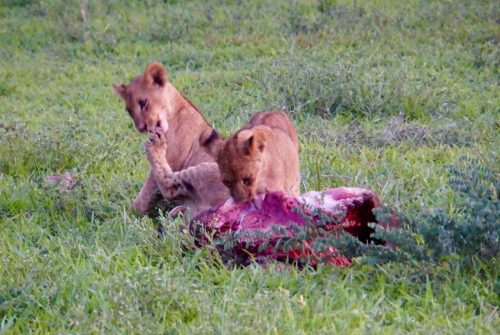 Two of the three cubs having a feast. 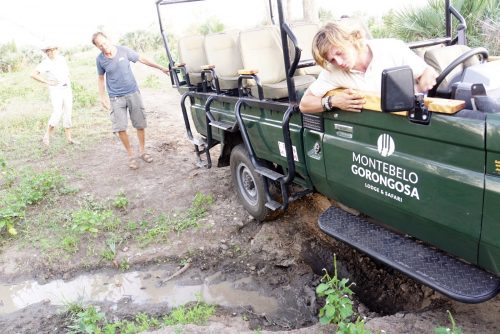 Our guide got the Land Cruiser stuck in a ditch, but expertly got it back out after we left the car. 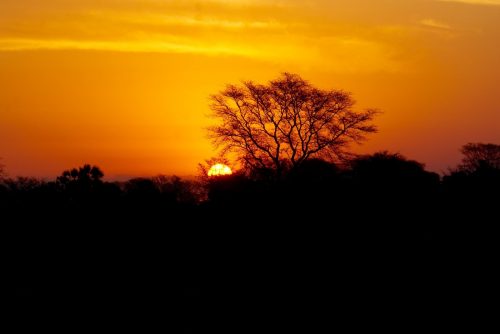 After Gorongosa, we passed through another escort, this time more serious. The distance was just 100 km, but the escorting vehicle this time was a Casspir armored truck (MRAP for the nerds out there). All the way along the road, patrol bases had been laid out, with soldiers guarding us. Again, we saw quite a few remains from attacks, but had no issues ourselves. 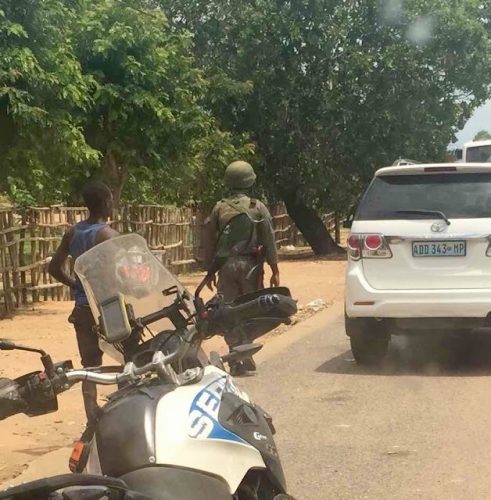 Waiting for “go” for our second, more serious escort. 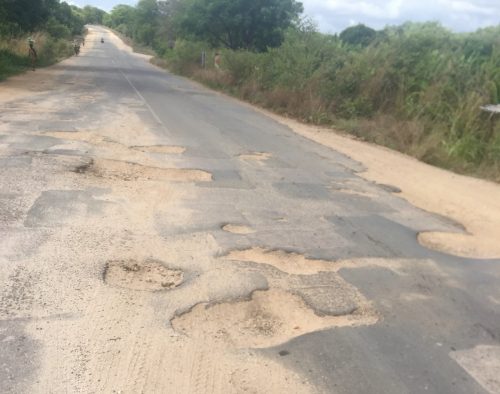 Not always great roads. Some of these potholes can be quite deep. 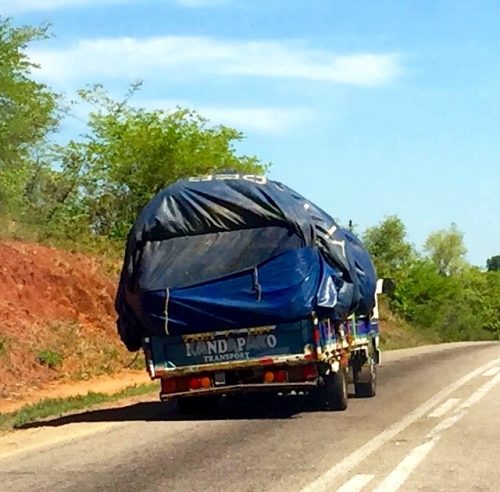 We arrived at a campsite next to the Indian Ocean. It was the first time we saw the sea since leaving Alexandria in Egypt. Bernard and Colette pulled out a bottle of champagne. We finished the night with prawns at a local restaurant. 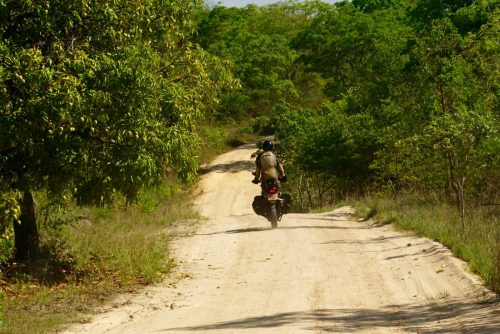 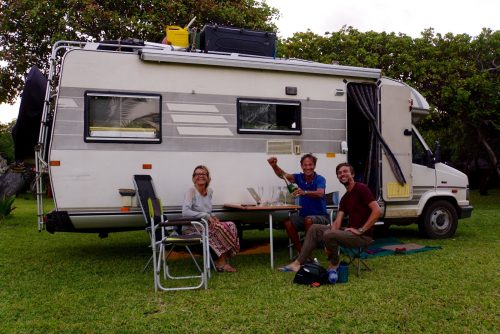 Celebrating seeing the ocean again – and if you are French, that takes champagne. 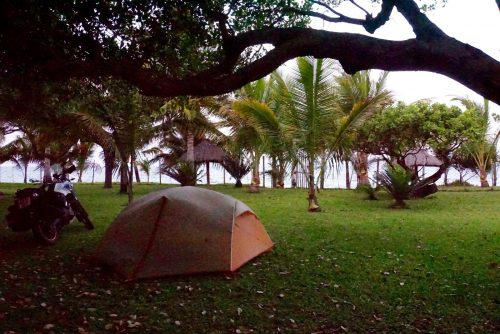 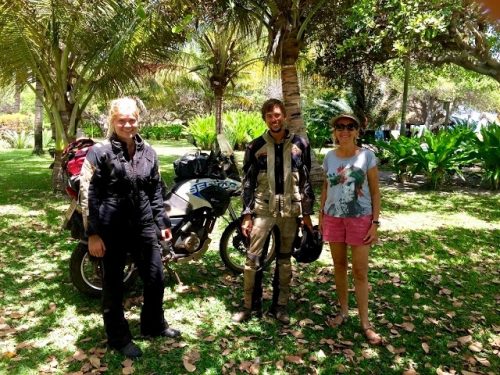 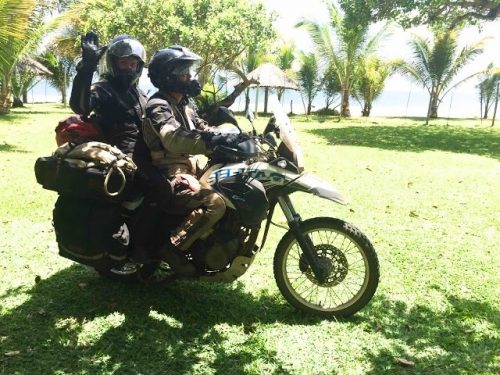 Next morning we had to say goodbye to Bernard and Colette. When we got up, Camilla discovered that we had a flat rear tire, but by now, fixing that is routine. Bernard made his signature breakfast with lots of fruits, and we thanked them for everything as best we could.

Two days of riding later, we checked into the hotel in Maputo. This afternoon my parents arrive, and we will spend two weeks exploring southern Mozambique and northeastern South Africa with them.