As we were on our path to leave Denmark, I felt a strange mix of emotions. I had obviously long considered what it would be like to finally set off on the big trip, but – as I sort of expected – it was nothing like I expected.

We had left our place in Aalborg on Sunday, which was technically the start of the trip, but the first day we only went to my parent’s place, less than an hour from Aalborg. We spent a pleasant night there, and the next day visited Camilla’s grandparents on our way to Holstebro, where Camilla’s parents live. There we stayed there for the night, re-packed our bags one final time, and left for Germany the next day, a Tuesday morning. The weather was gray, but it was not raining. The temperature was comfortable, but not hot. The mood was good, not stressed at all, but I felt slightly tense, even if I didn’t show it, nor even realized it myself. Camilla’s dad had taken the day off, and helped us with our very final preparations. Before we left, one of Camilla’s best friends passed by with his dad and said goodbye. We had a good chat, and suddenly it was time to go. 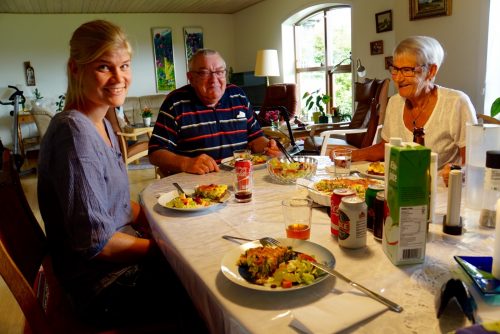 A small feast at the grandparents!

As we left Holstebro, Camilla and I somehow immediately got caught up in a discussion about ethics and morality via our intercom. I had not expected *that* for our first 20 minutes on the road, but she’s great to have these discussions with. We certainly don’t always see the world the same way. We also talked about how crazy it was to finally be on the road, but for me that was mostly because I figured I was supposed to feel that way. In reality I didn’t feel much other than trepidation about this whole thing. What if the bikes broke down and I couldn’t fix them? What if we could not find a boat to Egypt? Would I be a failure if we didn’t make it to Africa? It might be our trip, but I feel a great responsibility for making sure everything goes all right – the trip was my idea, after all, not something we came up with together. On the other hand, this first day was only a trip to Hamburg, and I have been there so many times before.

That first night at a campsite in Hamburg, we were both very tired, but also in a great mood. It had been a long day of riding, but I think the mental load had been weighing on us just as much as the physicality of the riding. 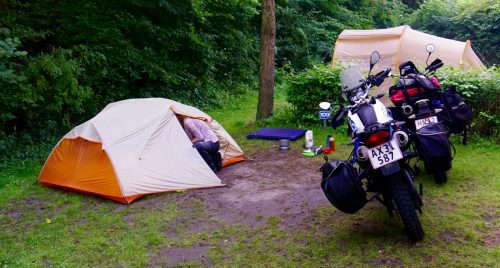 After the first night of camping, we had lined up two nights of Couchsurfing as we went through Germany. Couchsurfing is a website where travelers can sign up to host other travelers. It’s free to stay with people, but it is expected that you pay it forward, and host other travelers when you get the chance. It’s also a great way to meet people, and I have hosted many, many people in Aalborg together with my former roommate Johan.

Our first host was Johanna in Göttingen. She lived in an apartment shared with 5 other students on the top floor of a large villa. Most of the others had left for the summer holiday, and Johanna was generous enough to offer us her room, while she slept in the room of one of the flat mates. Johanna was an odd mix of hospitable and wanting-to-be-provocative, and we had some interesting discussions. She did not like self-driving cars. She thought medicine was a strange thing to study – even though her girlfriend did just that. She thought the dangers of smoking were overrated. Camilla and I liked her. 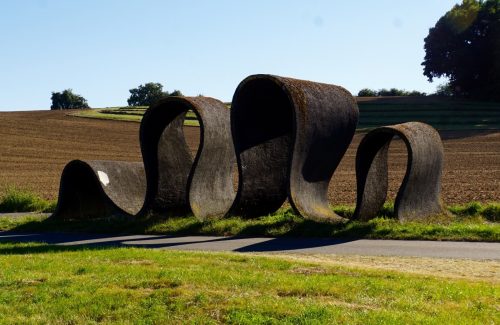 In the middle of nowhere, southern Germany, the roads can be quite poor. They claim it is art.

After Göttingen, we went to Oberstenfeld outside of Heilbronn, near Stuttgart. We were greeted by out host Jani and his best friend Nefi. Jani’s parents had left for holidays in Austria, so Jani and Nefi had the whole house for themselves. A huge house with a tower! I love houses with towers. Jani had just come home from a year travelling the world and living in New Zealand, and he was the embodiment of chill. He organized a small barbecue with another friend, and the five of us shared a few beers as we discussed the state of the world. He really made us feel at home, and it’s difficult to overstate how great it was to stay with him. 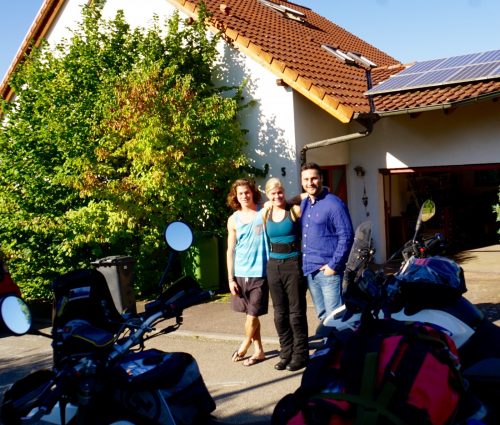 Now we’re in Switzerland after another arduous day of riding. In these first three days, we have done about 330 km every day, and as we have a rule about not using the motorways, that makes for a full day of riding. Usually about 8 or 9 hours when breaks are added. That is a bit much to keep up, so in the coming time, we’ll make a point of having shorter days with the ability to stop and see random things as we go along. Still, it was great to experience how Germany changed as we got further south, and we both agree that sticking to the small roads makes the experience so much richer. 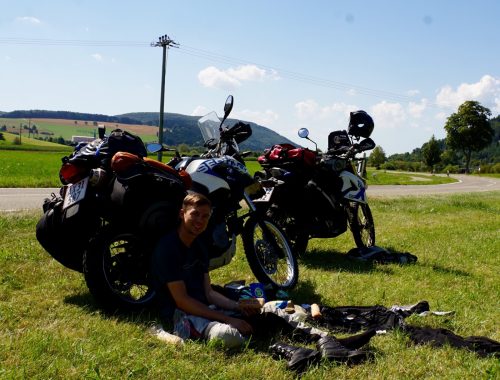 On this field, right at the Donau river, we enjoyed our lunch: baguette, turkey, cheese, and tomatoes. Yummy!

As for Switzerland, the tale about that will have to wait for the next blog post… Stay tuned! 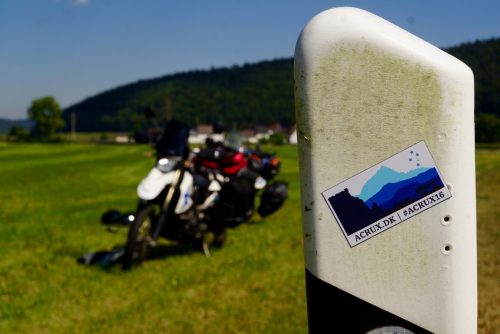