Ben Howard - Keep Your Head Up

We were riding in a cloud. It was not quite raining, but everything was wet and cold, and droplets of water formed constantly on my visor. Visibility was not bad, but the horizon disappered in a grey mist. To our left and right was an uncountable number of lakes with single-rock-islands peeking above the surface, sometimes with a single, scrawny tree on them. They were eking out a way to survive, barely. This was truly the land of trolls and gnomes. We were in the depths of Lapland in Northern Finland and Nordkapp was within reach. It seems to me that life for the native people who used to live – and still live – here can’t be too far from the life of those small trees on the rocks. 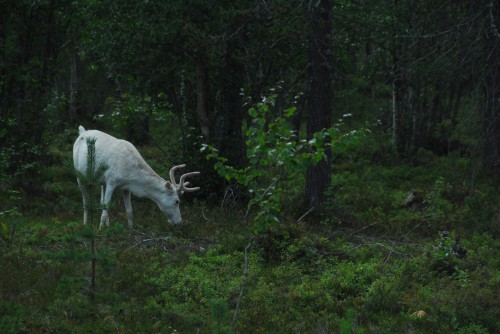 We had set out from Rovaniemi the day before, but quite late. As you might know, Anders had discovered that his drive shaft oil was leaking pretty badly. We had expected it to be a matter of finding a new gasket, but as he examined Bob on the parking lot of Shell in Rovaniemi, while I leeched on their free wifi, he discovered that the thread in the oil reservoir holding the plug was almost completely stripped. Now we needed to somehow fix that. Ideally, a new thread had to be cut, but we didn’t like that idea, because that would probably mean metal shavings inside the drive shaft compartment. And that would make it necessary to take it all off and clean it, at complicated task none of us had ever done, and which would probably take at least a day, even if we had experince and a workshop. A temporary fix was in order. After a few tries we found a mechanic who was willing to help and with lots of thin rubber tape on the bolt, they managed to close it reasonably well. 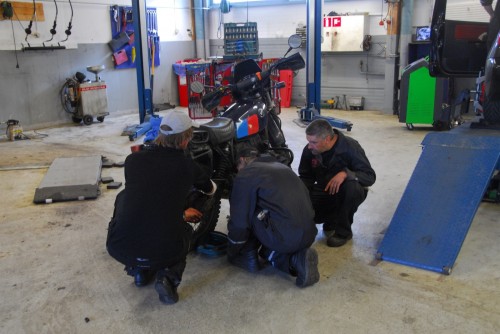 It was nearly 5 pm when we left. We crossed the polar circle just north of Rovaniemi and we wanted to do another 300 kms. We managed that, and when we arrived wet and frozen to the bone at the campsite in Ivalo we felt we could justify renting a heated cabin for the formidable sum of 40 euros. For the first time in 10 days, we slept in real beds.

Next morning Anders was really sick. The rain drummed in a constant, neverending rhythm on the roof. Anders (and to a lesser extent I) could not bear the thought of even walking out to the bikes, so he slept a couple more hours in the morning after breakfast. I devoured some pages of “Zen and the Art of Motorcycle Maintenance.” We had to check out at 12, so at 1130 I woke up a still sick Anders, who insisted he was able to ride. 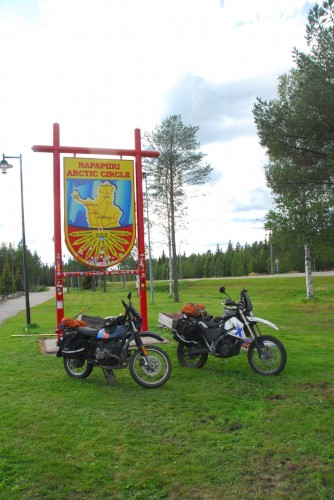 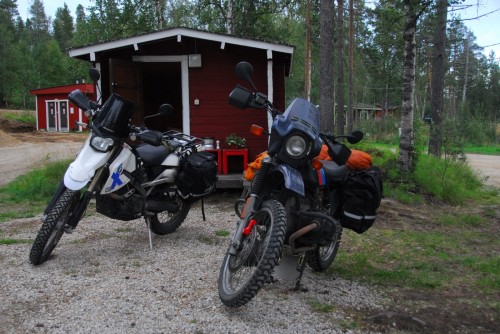 And so, a few hours later, I was in the land of trolls and gnomes. I’m not sure where Anders was, physically he was on his bike behind me, but mentally I think he was just trying to think of somewhere else, or not think at all. When we arrived at our lunch break Anders was shaking unnaturally of the cold, and while I felt the cold as well, I was not suffering to nearly the same extent. We had just entered Norway and took a long break at a restaurant, where I ate the world’s most expensive pizza (it was good, though), and Anders tried to regain his body heat. I was sort of questioning whether we should just find a hotel, but he wanted to keep pushing, and I selfishly wanted to keep going too, so I didn’t press the point. 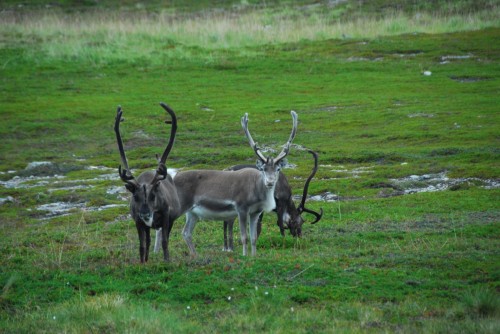 Soon we were in the land of Norwegian fjords. What a landscape! Rugged cliffs, a few with snow on the top, fell into the icy turquoise of the sea. The color of the water was really something. We were too far north for any real trees to grow, but many reindeer ate the grass alongside the road and sometimes ground us to a halt when they wanted to cross the road. We got an early taste of the roads through Norway with a perfect combination of long sweeping curves and tight corners in quick succession. A bitterly cold headwind dampened the enthusiasm a bit, though, and I was getting tired of being wet and cold. I can only imagine how Anders felt. We got to Honningsvåg, the closest town to Nordkapp, and checked in at the hostel. I unpacked my bike, but Anders went straight to bed, where he more or less stayed for the following 12 hours. It took him more than an hour to stop freezing. 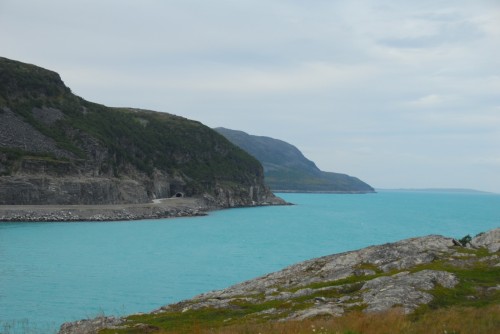 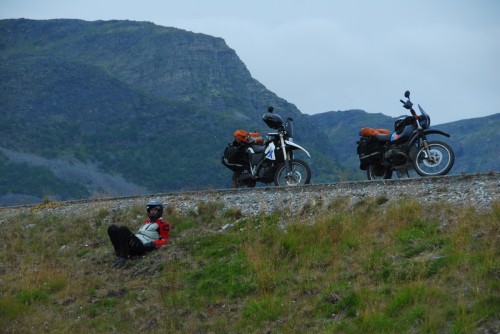 Fortunately, the day after he felt better, and we went out to Nordkapp. As expected is was nothing to look at, but it really was a great feeling to finally have reached it. Especially after the last 4-5 days of struggle. We bumped into a Dutch guy who we had met at a fuel station in Lithuania what felt like ages ago. It ws nice to catch up with him, it turned out that he had seen our parked bikes at least two times on his way up – he even had a picture of them parked in Tallinn – but had never met us in person again. 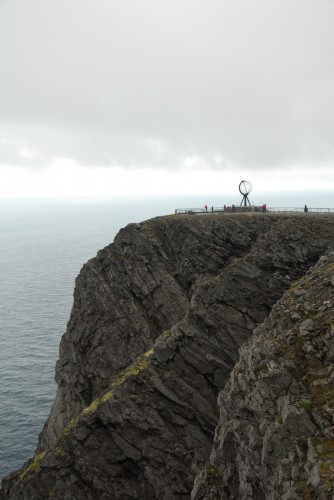 After a celebratory high-five, we jumped on the bikes and headed south for the first time in many, many days. Now we just had Norway left to conquer. 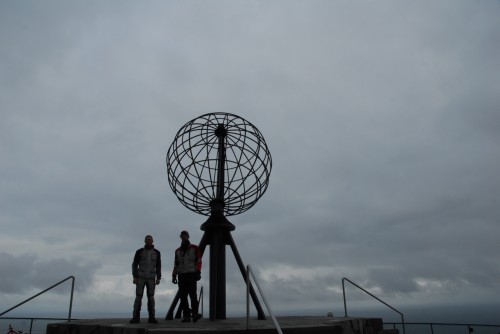 We made it all the way.