Not a wind is moving and the trees are precisely chiseled silhouettes against the darkening sky. The last orange rays of the sun are highlighting the very sparse clouds in the distance, but for all intents and purposes it is dark. The neighboring campsite, some 100 yards away is inhabited by a handful of guys and one girl, somebody’s girlfriend I suppose, in their early twenties. They have brought music and generally play pretty forgettable punk rock, but just ten minutes ago, as the twilight was coming to an end, their iPod shuffled to Comfortably Numb, and for a brief while everything – the trees, the cicadas, the darkening sky, the music – came together in an ethereal symphony. 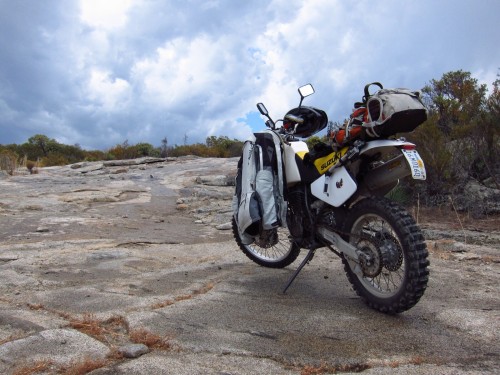 The air is neither cold nor warm and I’m cradling a Corrs Light as I’m sitting next to my bivouac and the moon rises. I had forgotten how bad that beer really is, but it has sentimental value for me. And besides, the selection at the nearest gas station some 40 minutes away was meager at best.

It’s the 4th of July and earlier the fire marshall drove by to make sure nobody on the campground was planning to celebrate with fireworks. We’re in the mountains in the middle of Cleveland National Forest, which stretches from LA to the Mexican border, and California is suffering from its worst drought since 1977. Not the time to start a forest fire.
“You’re running a low key operation, huh? Just you, the bike, and the bivouac,” he said, “no fireworks?”
I assured him I had none, and felt smug that I had such a low footprint compared to the three other groups at the campsite, two of which comprised a least four cars. 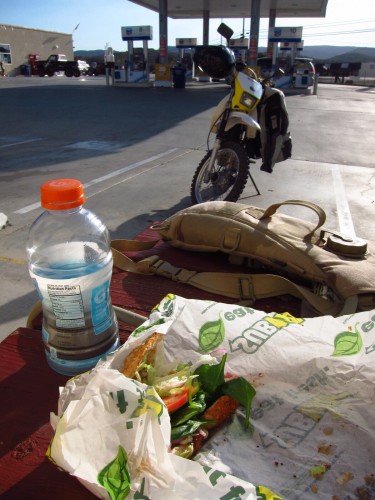 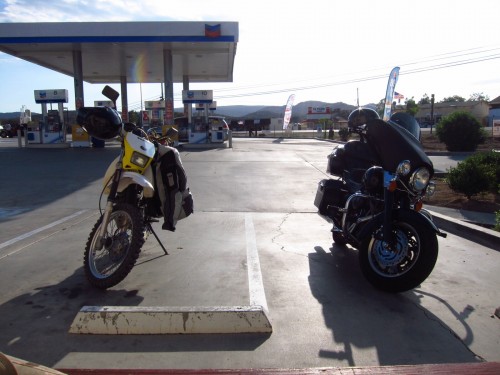 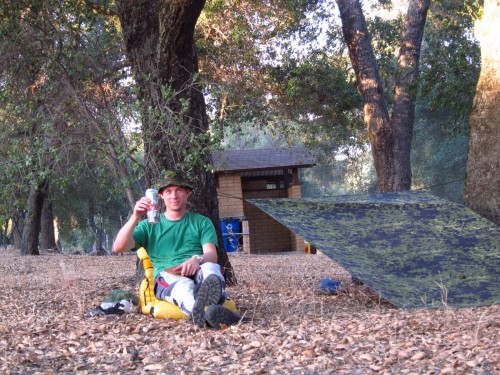 As I’m leaving San Diego in less than a month and returning Pidge to her original owner in a week, the 4th of July weekend was my last chance for a trip. I had originally set my sights on the Bradshaw Trial, an old stage coach trail I’ve found out east of Salton Sea, but it’s too long for my fuel range, and the desert in July is too hot. Instead I strung together a greatest hits route around San Diego. It started on the delightfully twisty highway 94, which hugs the Mexican border, to Campo where it turned north to Corral Canyon for a day of single trail off-roading and a night of camping. Carrying on north, it followed Sunrise Highway, through Julian to Palomar Mountain and home from there. 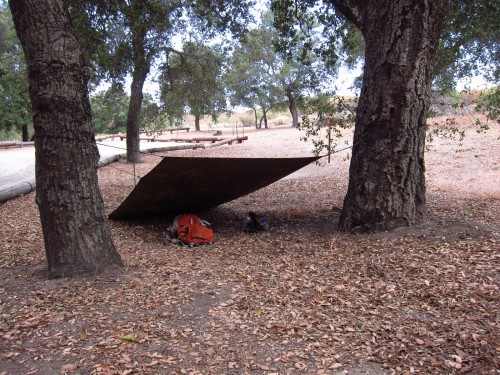 Base camp in Corral Canyon.

In Corral Canyon I set up camp at the aptly named Corral Canyon Campground. I had expected it to be crowded due to 4th of July, but apparently the lack of water, electricity, and, well, anything at all kept the crowds away. When I started out riding, just after noon, I could barely complete the longest trail rated “easiest,” the Wrangler Trail. I had been to Corral Canyon a couple of times before and never ridden it in full without falling or walking the bike through the worst sections. By the end of the day I had ridden the Wrangler Trail twice – one of these all the way without mishaps – as well as the remaining three trails rated easiest. 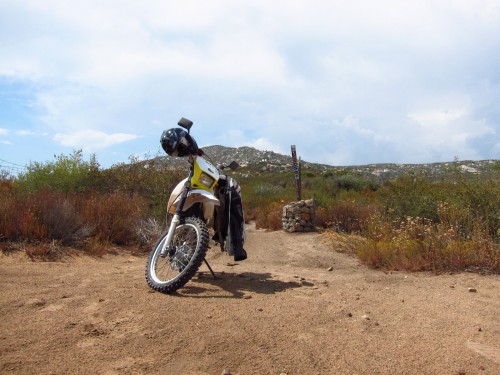 At the end of the Wrangler trail! 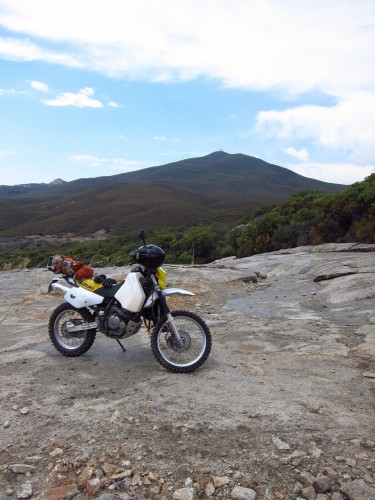 Los Pinos Mountain in the background. 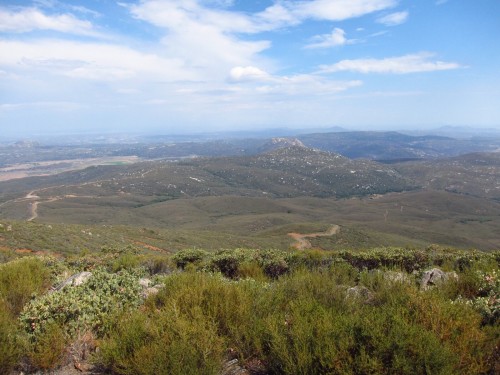 The view from Los Pinos. 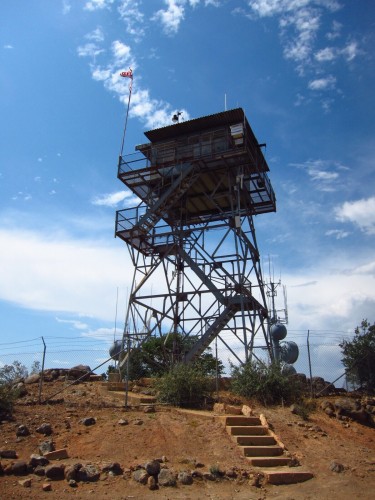 At this point I felt quite confident on the trails, although of course my skills are nowhere near more that of more skilled riders. This is good training, as I expect these to be more difficult than anything we will encounter on our trip through Africa and Asia. Even the trails with the “easiest” rating. I was continually amazed by how well Pidge handled the very rough conditions. With 15 years under her belt and a puny 350 cc, she was a far cry from the lean and mean 450-500 cc KTMs and Yamahas everybody else seemed to be riding, but she took it all in stride, even with luggage. 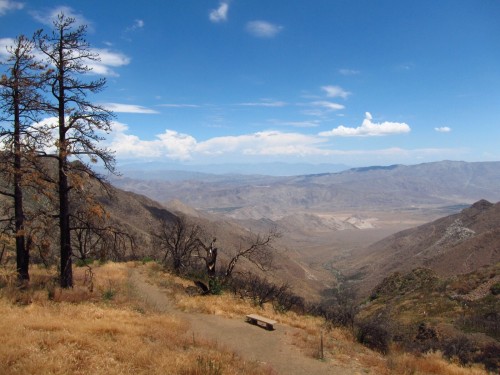 A look out over Anza-Borrego.

Next morning, as I was setting up for breakfast, my neighbor came over and invited me over for coffee. Danny (I’m afraid I have his name wrong, but let’s just stick to this for now) and his wife Nicki was out here in their Jeep Wrangler, holding a camp site spot for the rest of their group, who would arrive later that day. They too had expected it to be more crowded. Danny and Nicki were originally from Missouri, but he was in the Marine Corps and currently stationed in Camp Pendleton just north of San Diego. They were extremely friendly and as I ate two of Nicki’s delicious blueberry muffins we discussed the differences between the US and Europe, where they had never been. Danny said that he was “smart for a Marine, but not smart,” but I disagree. They were both quite knowledgeable about both politics and international affairs, and while we had very difference backgrounds, them being very conservative, they were genuinely interested in how we did things in Denmark. I admire people who are curious about the world. It ended up being a nearly 2 hour long conversation about politics, society, and of course military affairs, punctuated by the roars of a nearby trio of heavily modified pickup trucks which tried to conquer the extremely difficult Bronco Peak Connector trail.

I said goodbye and packed up my stuff. I planned to do a few more trails before heading north. In the middle of it all I completely forgot to eat breakfast, and people who know me will attest to me being generally very fond of breakfast. Two cups of coffee and two muffins just doesn’t cut it for me. I headed out on the Bobcat Trail and could feel my lack of energy right from the first hill. This was not going well. I stalled at least three times, fell over once, but fought my way up what should have been a rather easy incline. Rode a bit further and paused to eat a pack of trail mix, which was my breakfast. 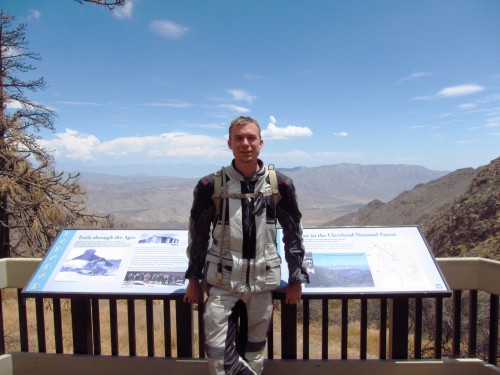 Continuing on, I got through the trail without much more fuss, but my flow was horrible and I generally did not feel great. I decided enough was enough and headed out of Corral Canyon. At the trail mix was absorbed by my system I gradually felt better, and as I hit the spectacular views on the Sunrise Highway I was smiling from ear to ear and truly enjoying the ride. 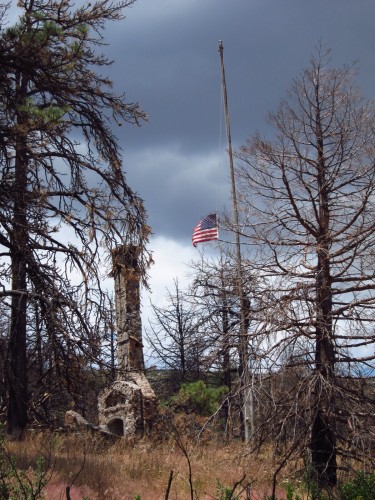 In Julian I took a quick detour down the road towards the Anza-Borrego desert, partly to feel the heat, but mostly because the road down from the mountains is just great. At the bottom I soon had enough of the soaring heat and headed back up. Julian was exactly as crowded as one would expect on Independence Day weekend, so I carried on through, and stopped at Julian Pie Company in Santa Ysabel for my obligatory piece of Boysenberry-Apple pie. 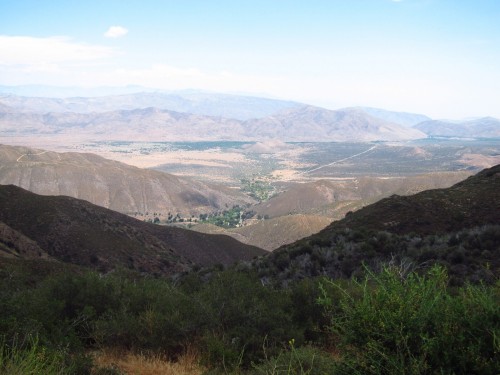 Anza-Borrego viewed from just outside Julian. 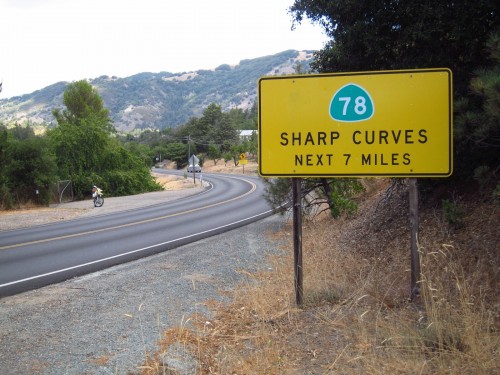 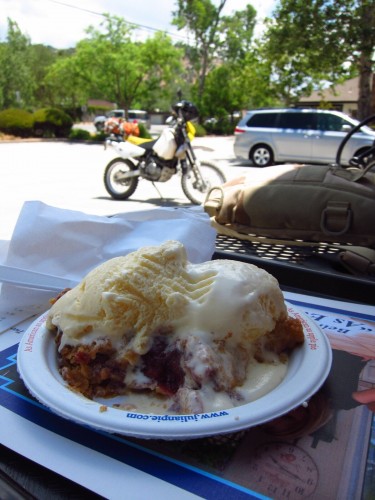 The mandatory pie in Julian.

Then I went further north towards Lake Henshaw and Palomar Mountain, my last destination. I really is a great road and – again – fantastic views going up there. At the top I visited Palomar Observatory, which runs the 5.1 meter Hale telescope, apparently a pretty important thing in the field of astronomy. For some reason, though I’m very interested in almost all kinds of science, I never really got into astronomy. I gather they use the telescope to look at space-things in space. 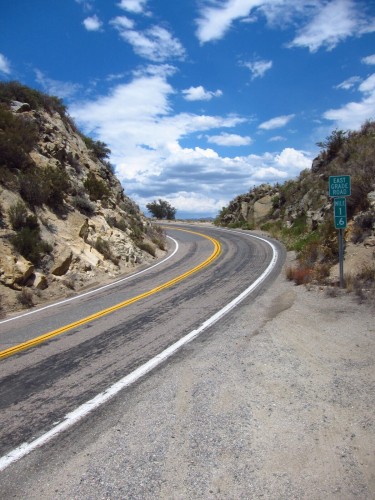 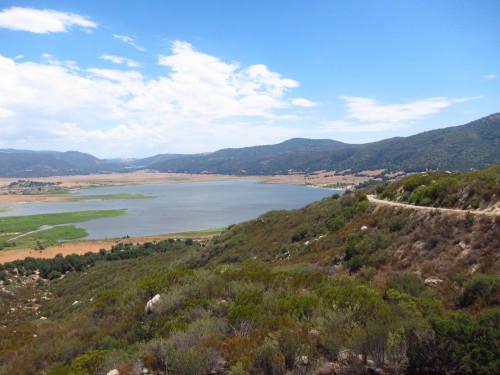 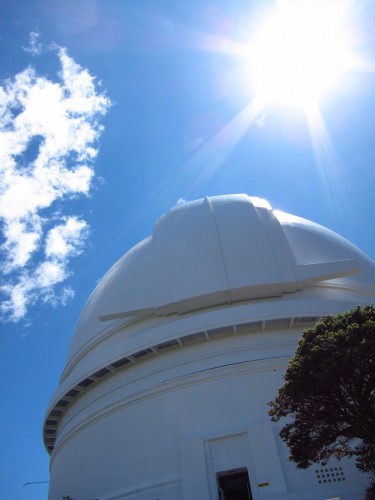 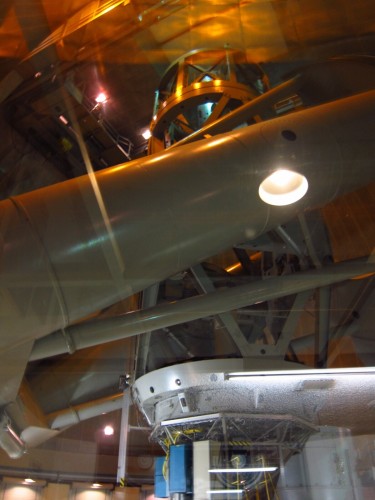 The actual telescope which they use to look a space things in space. Astronomy is not my strong suit.

It was mid-afternoon and I felt like wrapping up the trip, so I headed down the mountain and back towards La Jolla. The trip back was pretty boring – city and freeway riding is always an anti-climax after a trip like this, but I made it home very happy about my last trip with Pidge. 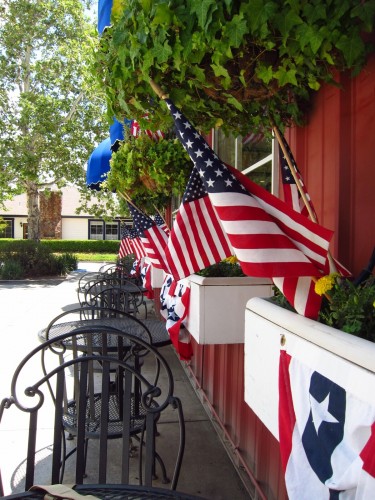