It was difficult to hold back a grin, as I was staring out the window of Ahmed’s sparkling white Mitsubishi Lancer with a rally-spoiler and Sia’s latest hit “Chandeliers” at full volume on the stereo. Just two days earlier, I had laughed at the surrealism of driving through the dirty streets of Alexandria in Mahmouds taxi, a 40 year old black and yellow Lada 1200 with christmas music in the underpowered speakers – Celine Dion’s version of Last Christmas. The contrast could not be any stronger.

After finally receiving our motorcycles in Alexandria, we rode towards Cairo that same night. We had arranged to stay with Ahmed, another Couchsurfer. We were to just stay one night, as we had seen most of Cairo already, and frankly yearned to get further south. Our impression of Egypt was mostly trash, chaos, and poverty – and no desire to improve things.

An upside-down Dutch license plate hiding behind the Egyptian one. This seems to be very fashionable in Cairo.

As we stepped through Ahmed’s door, we entered another version of Egypt, completely separate from the one we knew. The two Egypts might share name and location, but they have nothing to do with each other. Ahmed was a pharmacist and lived in a nice apartment in a 5-6 story apartment building his family had built. One of his brothers – an IT-specialist – lived downstairs with his familiy, and the other brother – CEO and owner of an IT-company – commuted back and forth between his branches in Egypt and Dubai. His mom also lived in the building, which she had designed. The rest of the apartments were to be rented out, but they were not yet finished.

Ahmed lived close to Mall of Arabia, the largest mall in Egypt. After we had showered, he asked us if we wanted to go out. We were a little tired, but did not want to disappoint the almost aggressively hospitable Ahmed. So we went to the mall, and after a very superficial check for weapons in the car, we parked at entrance number 21. This place is huge.

Just walking from one end to the other took 30 minutes. The place is chock full of western stores, from Nike to Giorgio Armani. Everything is white and well-designed. The place can easily compete with any American mall I’ve been to. We dropped by on the first weekend night of the week, and the place was crowded with people in fashionable clothes, high heels, carrying plastic bags.

We ate at a good restaurant in the mall. Veal medallion in mushroom sauce was a bit of a departure from fuul (beans) and koshari (macaroni with rice and roasted onions). It was around 10, and Ahmed explained that Egyptians have no fixed meal times. They just eat when they are hungry. The entire mall was open until 1 am. Even at midnight small kids were running around, playing. Apparently Egyptians never sleep.

Ahmed wanted nothing to do with the idea of us leaving the next day, and to be honest, a day of luxury suited us well. Ahmed was on vacation and wanted to show us the parts of Cairo we had not yet seen. He brought us to the quarter of christian churches, which was very interesting to see. There’s a long way from a Danish protestant church to a coptic cathedral in the heart of Cairo. 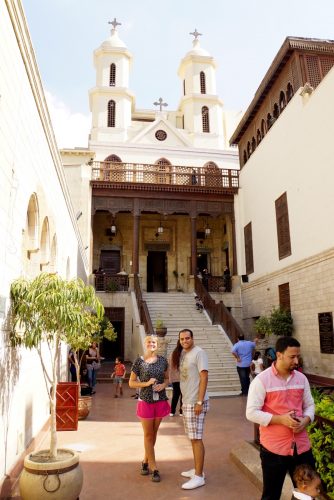 Looking at churches with Ahmed, our private guide, driver, and friend. 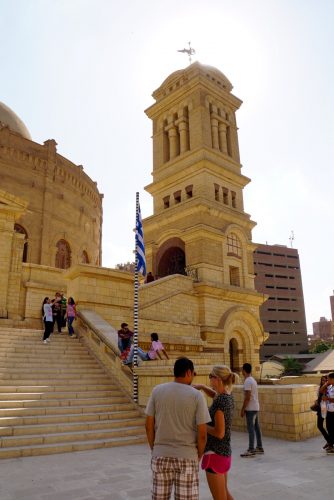 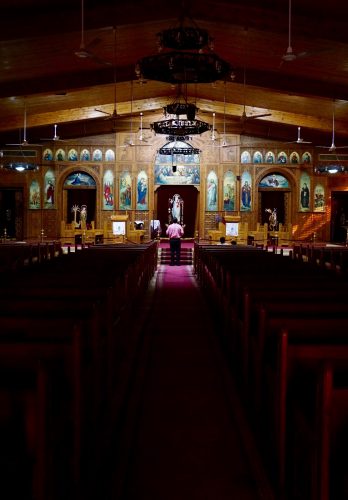 Then he took us to an upscale café along the Nile, where we had a light, late lunch. Ahmed ordered sheesha (hookah), but did not have much luck in selling us that idea. Meanwhile, time passed, and the sunset was about ready for the main attraction of the day: A trip with a felucca – a sailing ship – on the Nile.

Ahmed parked us at the gate to the pier and continued past the dozen of other tourists trying to rent a boat. Getting a good price would be easier without us. Shortly after, he was back and escorted us past another group of 10-15 tourists boarding a felucca. We jumped into our own private felucca. Pink, as per Camilla’s wishes.

We sailed around in the sunset for about an hour, with sails and rudder expertly operated by our weathered captain. It was a thoroughly magic experience. 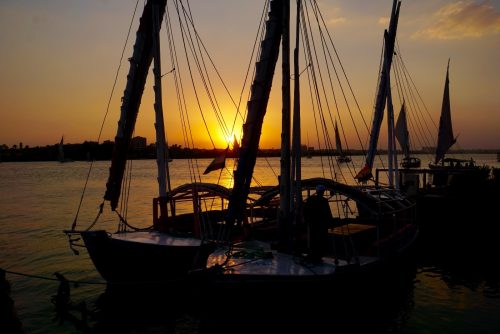 We sailed in the left-hand Felucca. 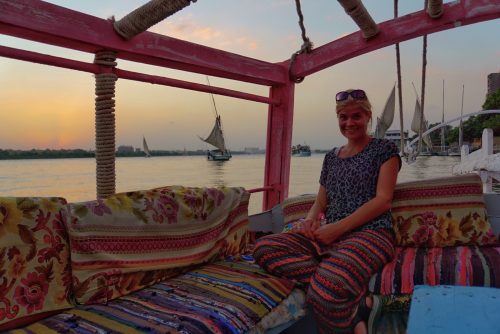 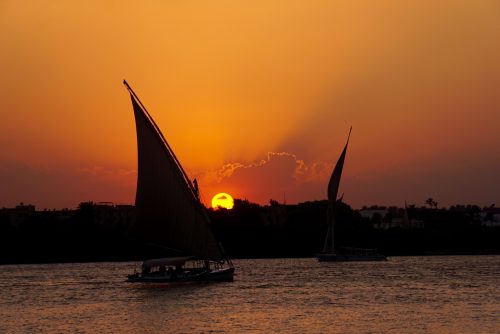 On our way home, we stopped by a Cinnabun, had cakes as large as handballs, and met Ahmeds good friend Mohammed, who worked at Cairo American University and spoke a fluent American. And was a very nice guy.

Next morgen we just had to get going, no matter how we enjoyed staying at Ahmed’s. My friend Mads was in Luxor for work, but about to return home. It would be nice to say hi to him, and he also had some dollars, which we kind of needed. Ahmed had told us that there was not much to see on the way there, so we decided to do the entire trip in one day. We had neven before done 700 km at once, but were ensured that the army had recently built a great new road.

And they had. Going there went really well, with three exceptions. After a couple of hours we got worried about Camilla’s coolant level. We could not see the level in the tank, so we had to get the tools out and take some plastic off the bike. Fortunately, there were no problems. A bit later, just afted we had refueled, my bike complained about an almost empty tank. By mistake, I had only filled my extra tank, not my main tank. We had to go back 30 km to refuel properly. Gas stations are rare in Sahara. At the end of the day, we were withheld at a checkpoint in Qena for 45 minutes for no reason. “We must wait for cheif. 10 minutes.” 45 minutes later, the cheif had not shown up, and we were let go. 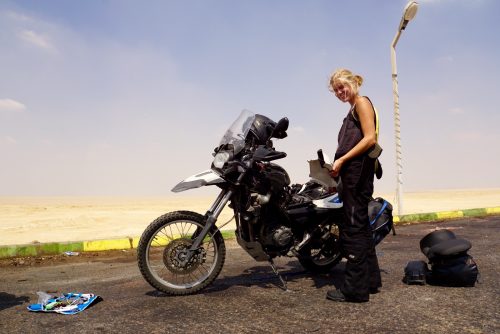 But we made it to Luxor around 8 pm and had a nice dinner with Mads, as we shared our frustrations about Egyptians. He let us know that they are also not great at building and running cement plants. It was a really weird thought that Mads would be back in Aalborg 24 hours later, now that we had spent more than at month going to Luxor.

In Luxor we visited Valley of the Kings and the Karnak temple, with private driver and guide. Everything was of course arranged but wonderful Ahmed, who knew somebody who knew somebody. Our guide had a degree in history and was very competent. Both attractions were fantastic, much better than the pyramids. 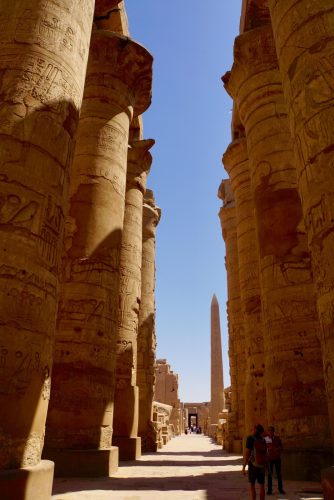 Columns in the Karnak temple – expertly explained by our guide Nour in Luxor. 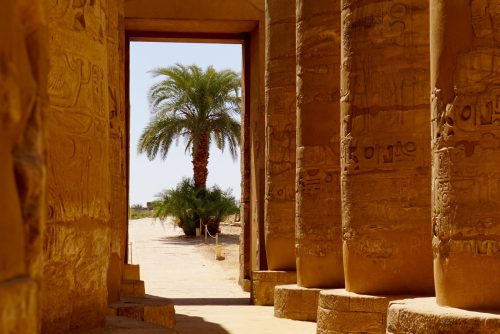 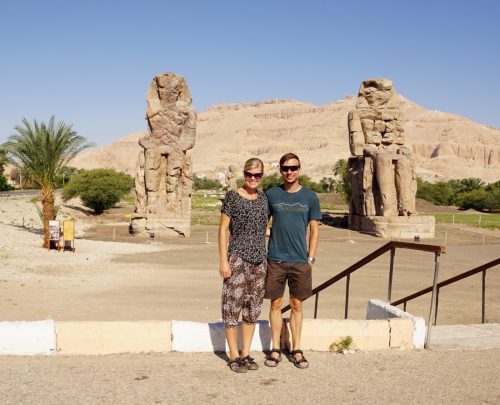 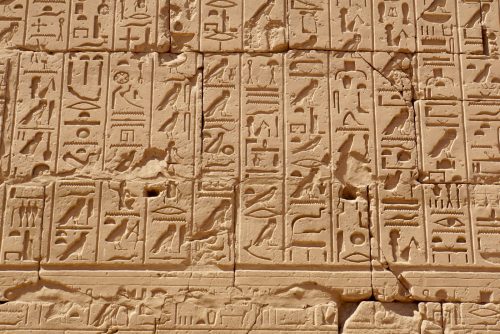 From Luxor, we rode to Aswan, where we had to coordinate the border crossing to Sudan. It is not something you just do, it involves a military escort (for no real reason, everybody agrees it is safe here), a ferry ride, and about a day of paperwork at the border. We had a taste of this on the way to Aswan, where we suddenly had police escort. Out of the blue, a police car appeared in front of us, and when we tried to overtake, we were to to stay behind. Then, every 20 km, the car was relieved by a new one, and they ended up escorting us all the way to the hotel. For no good reason. Aswan feels very safe. 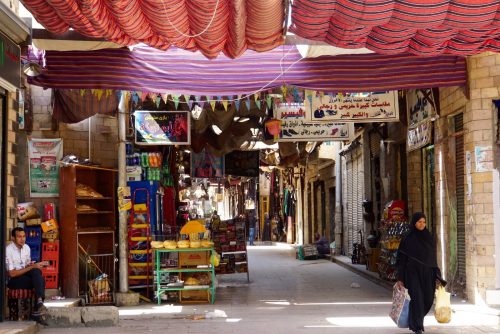 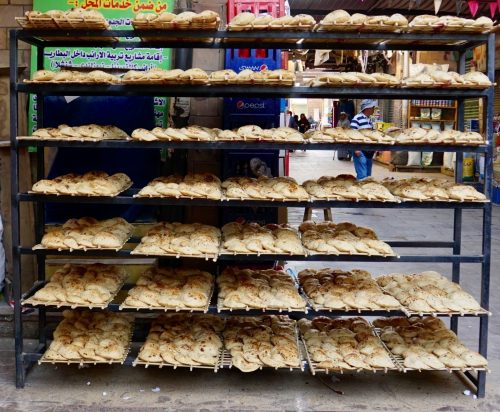 The locals eat bread like this for every meal. They taste of nothing. 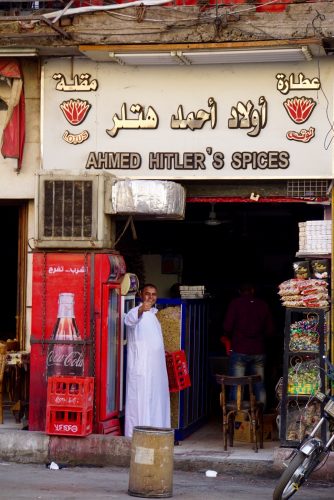 Ahmed says hi every day as we pass his store. 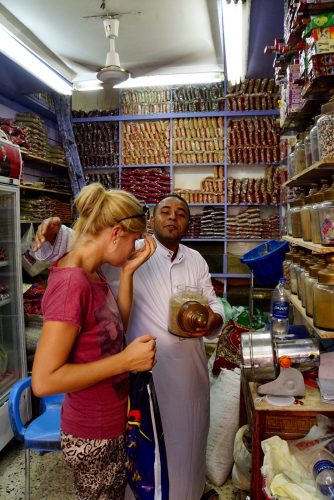 Spices are available by the truck load. Unfortunately, we’re on bikes… 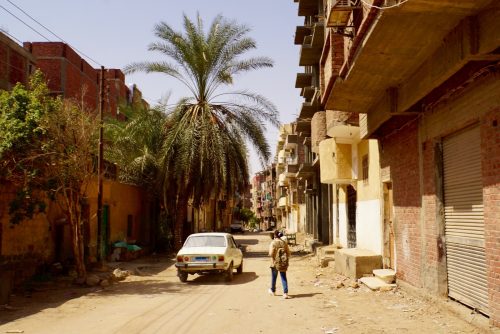 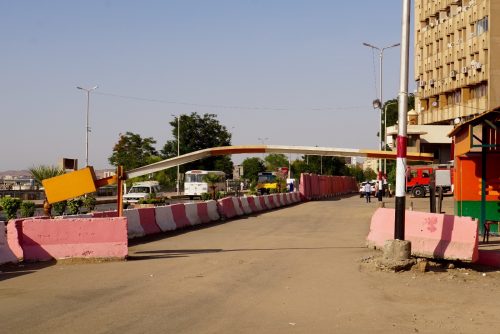 Why bother opening the gate all the time? Just go under.

Now we’re sitting at the rooftop terrace of the hotel, waiting for our Sudan visa. Hopefully we’ll have it tomorrow, but noone dares to promise anything. If not, we have to wait here for another three days. We’ll see. 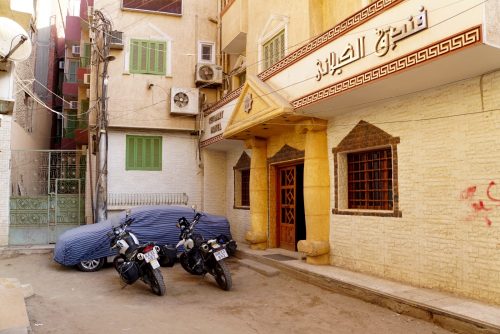 Parking for guests of honor at the Aswan hotel (the excellent and cheap Keylany). 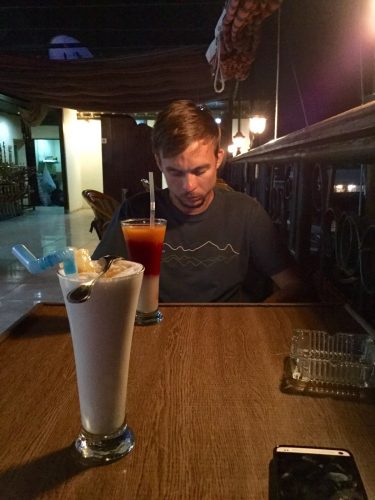 Night after night in Aswan, we go to the same café for a drink and internet.