I’m sitting on at terrace i Croatia. It is 11:02 pm. Hell’s Bells by AC/DC is playing at a mindnumbingly loud level from the neighbor’s garden. We’re staying with Ivan, 31, heavy-metal musician with to recorded albums and many concert tours in Eastern Europe behind him. Tattoos down both arms. We arrived around 6 pm and Ivan greeted ud with a whiskey in his hand. The first of many Johnny Walker Red Label he poured himself tonight, before he left for the neighbor’s party.

It’s the neighbor’s bachelor party and Ivan has borrowed him his sizable speaker system – loud enough for a metal-concert at a medium sized Croatian sports field. I’m trying to collect my thoughts after a strange night. Ivan is a complex person. I guess you become that, when you experience mortar shells falling in the garden, home alone, while mom is a doctor at the front, patching up soldiers, and dad is stuck somewhere in a truck in a supply convoy.

Just after we arrived, Ivan declared that he was planning to cut out our organs and sell them to the highest bidder. Then he served us a delicious traditional meal of octopus and potatoes. Showed us our room with exquisite hospitality. And then he expressed his admiration for our trip. He has a very well-equipped music studio in a room next to his house. His guard dog (“ignore it, it seems nice, but all of a sudden it will bite you”) keeps us under a watchful eye. I take another sip of the two-liter bottle of beer he’s given me. Camilla does not like him one bit, but I think he’s a basically a good guy, and I’m certain I can convince him to put down the Kalashnikov, when he comes home drunk later tonight and wants to shoot in the garden.

The adventures have begun.

We left Bruneck in Northern Italy a handful of days ago and rode wonderfully twisted roads through the Dolomites to Slovenia – our soft introduction to the Balkans. Here we stayed two nights at a very nice campsite deep in the mountains, not far from the Italian border. We spent a day relaxing and exploring the small town of Kobarid. We visited the city’s museum of WW1, but left without learning much. Most of the text was translated, but there was not much af a narrative to the exhibition. We hiked the Kobarid Historic Trail, a three hour trip past a memorial for Italian WW1 soldiers inaugurated by none other that Mussolini, late roman settlements, and WW1 trenches. And a spectacularly beautiful turquoise river. 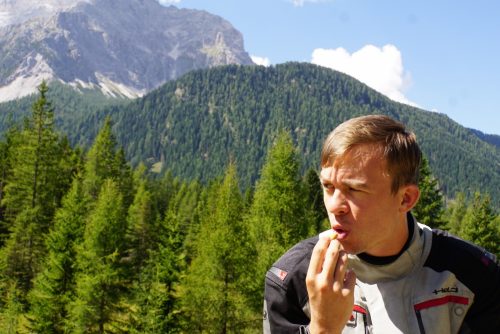 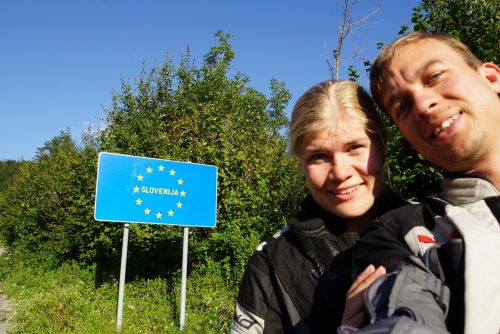 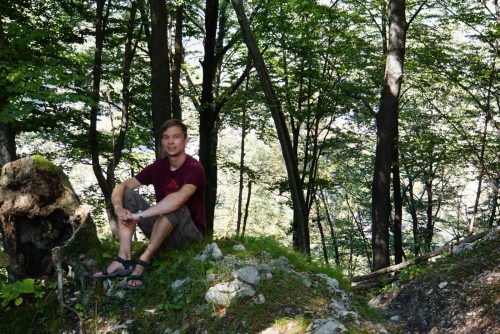 Break at the hike around  Kobarid – here on the outskirts of a roman settlement. 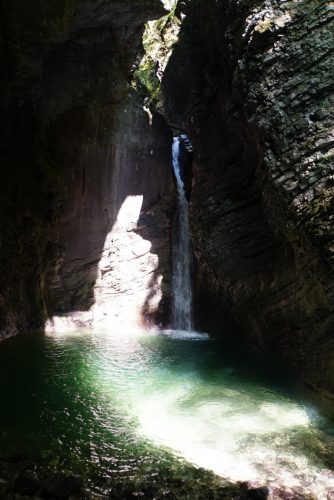 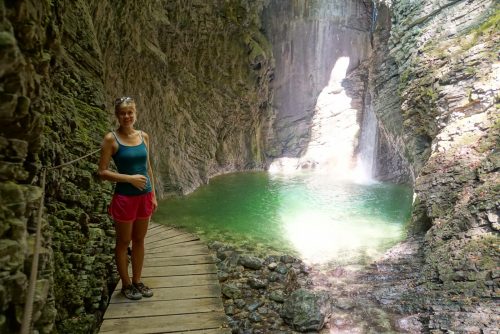 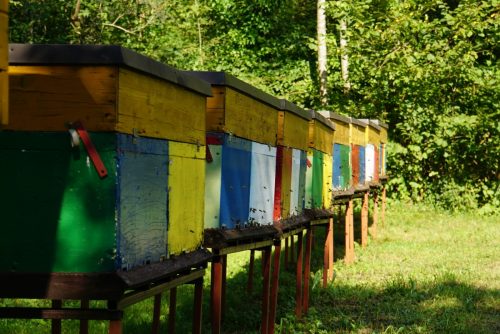 From Slovenia, we entered Croatia with Rijeka as our first stop. The city is very similar to other Southern European cities, so all our preconceptions about the Balkans as a war-torn wasteland were quickly dissolved. We spent the afternoon at a cozy café at the harbour, and found dinner at a restaurant on a ship. But not just any ship. It turned out to be the former Kronprinsesse Ingrid, which in the early 1900’s sailed as a ferry between Frederikshavn and Gothenburg. Frederikshavn is just an hour from where we live, so it was almost like being at home. 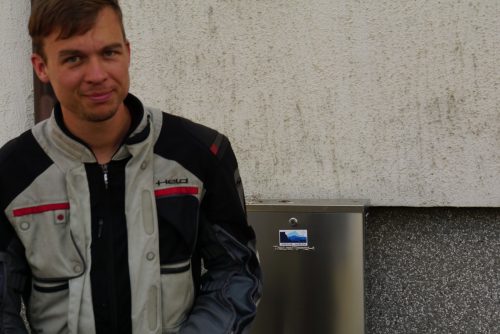 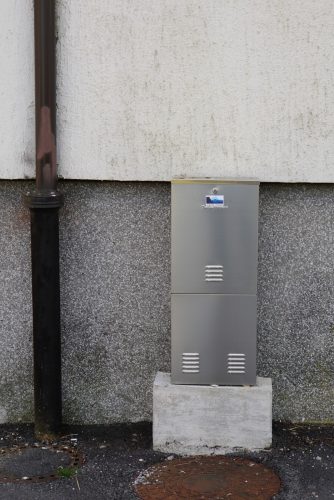 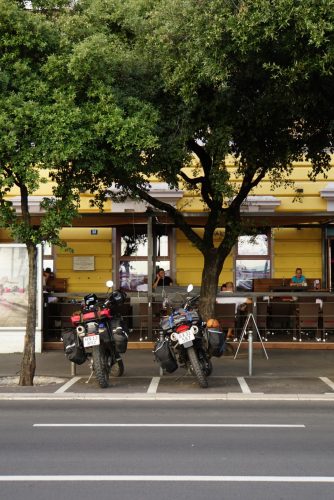 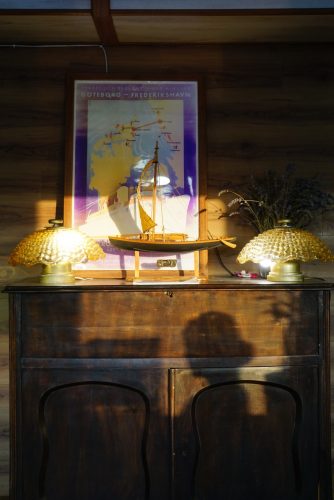 Denmark framed on the restaurant ship.

In Rijeka we stayed with Danny in a very sparsely furnished East Bloc concrete apartment. He was also a bit of a character. He had lots of very strong opinions about everything and wanted to seem like a well-read gentleman, but had no arguments to back his opinions up and categorically refused to let us finish our sentences. He chain-smoked cigarettes and popped Codein pills as if they were candy. But despite the fact that he was difficult to talk to, he was friendly enough. I think it is safe to say that growing up in the middle of af civil war does not do good things to you. Fortunately, he also had another couple of guests, Amir and Dana from Israel (who were both super cool), and as Danny was very fascinated by jews, they had to suffer most of his questions.

The next day we rolled further south along the beautiful Croatian coast. On the way south, Camilla used her rear brake caliper to pick up a plastic bag, causing a complete lack of braking capabilities on the rear wheel. She made it to the lunch break, after which she removed the brake pads under my somewhat capable supervision. She then removed the bag and put everything back together. All while only wearing underwear. My dreams have come true. 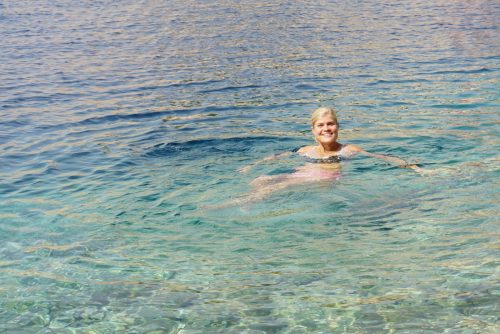 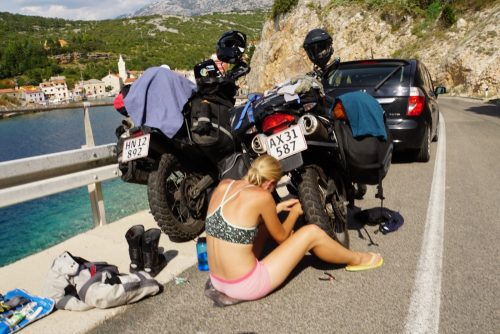 No problem fixing these brakes…

The area gradually began to look more like we expected it to, with abandoned and decrepit buildings mixed with unfinished shells of concrete houses. We didn’t cross a specific threshold, the land just slowly shifted character. And this was where we met Ivan. He lived with his parents, sister and her husband in a very nice house in a nice neighborhood just south of Zadar. He never started shooting that night.

From Ivan, we left towards Mostar in Bosnia, where we stayed at a tiny, but cozy campsite in a garden in the small town of Buna. On our way there, we visited Split in Croatia, where we fought our way thorugh the hordes of cruise ship tourists to see the on roman town center. Today we rode from Bosnia to Montenegro, where we plan to spend a couple of days. The story about that trip will have to wait till tomorrow… 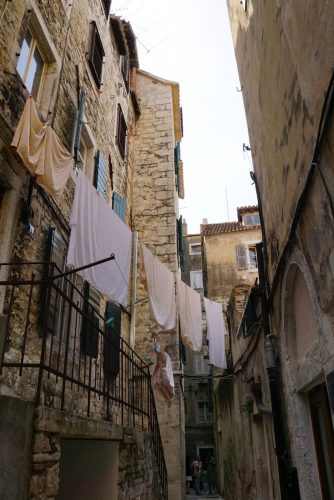 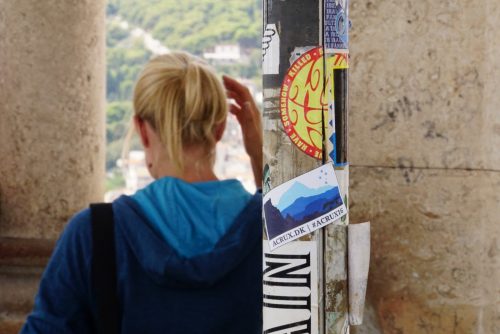 « The Alps
Through Bosnia, Montenegro and Albania to Greece »
● ● ●