We left Arkadiusz and Slupsk a little before 10 am Saturday morning, knowing that this would be the longest day so far. The destination was Miroslavas in Lithuania, some 550 km away, where we would meet my good friend Renata. The GPS siad we would arrive at 6:30, but it was not going to be that easy.

First we hit traffic around Gdansk. The first 300 km took a long time and after lunch, our projected arrival was around 9 pm. 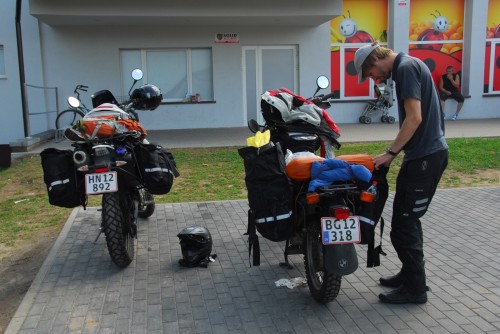 The next 110 km were fantastic. Narrow, twisty country roads in beautiful rural scenery with next to no traffic made it easy to get going. Anders spent the next break adjustning his headlight, which he had accidentally mounted upside down, since it was now inevitable that it would be dark before we arrived.

The final stage – another 110 km – was to take us from eastern Poland to Lithuania. It started out well, but we quickly hit extensive road works and over the course of 40 km, first one anden then the other lane was blocked. That meant lots of waiting at signals. At the end, there were not more signals, but the road was blocked and marked with a no entry sign. 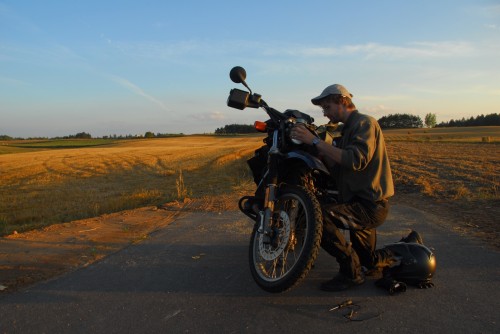 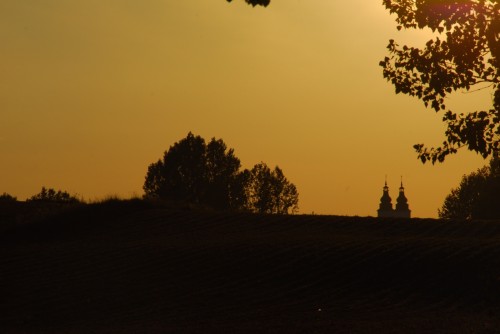 Well, we had a place to be and our bikes are fairly offroad capable, so after a quick glance at each other, we rode around the sign and onto the gravel and sand that was to become a road. It went well, and we were quickly back on tarmac. Second time went well too. Third time, I could see the lights from the next town and thought “unless they have removed a bridge, we’re going to make it!” That’s when I realized they had removed a bridge. We passed two confused road workers in front of their mobile homes, but had to face the fact that a creek was obstructing us. We rerouted, refueled and was in Lithuania soon after.

At 10 pm we were finally there. Well, we had forgotten about the 1 hour time difference, so actually it was 11. We didn’t have a detailed address of Renata’s moms house, but her desciption of the road was easy to follow. Until we had to pinpoint the exact house. We didn’t feel like knocking on a wrong door in the middle of the night, so after nearly an hour of looking around, we rode out of town and pitched our tent on a field hidden by some trees. 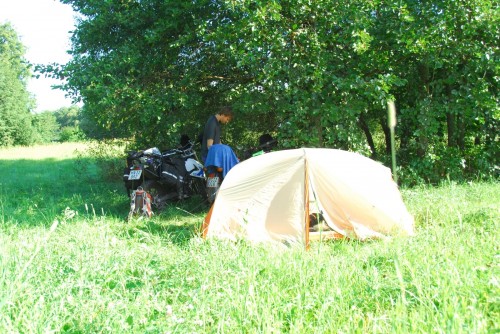 Sunday morning we rode back into Miroslavas to have another look. I did not have high hopes, but we went to the same street as earlier, and there she was, waving at us from her courtyard. Piece of cake.

We stayed with Renata and her family most of the day. They are in the process of restoring a house – a project going on its tenth year – which the also live in, at least during summer. It is very primitive. Only electricity in some rooms, and no running water. From the outside, though, it looked very nice with a brand new roof. They gave us a warm welcome and her mom immediately made us pancakes, even though we were a day late in our arrival. 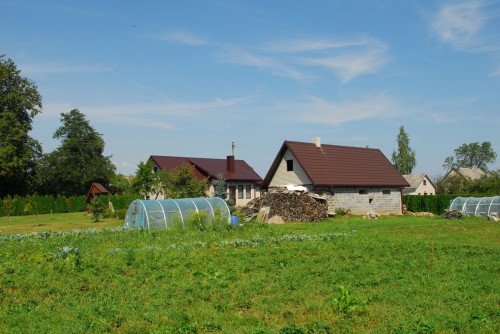 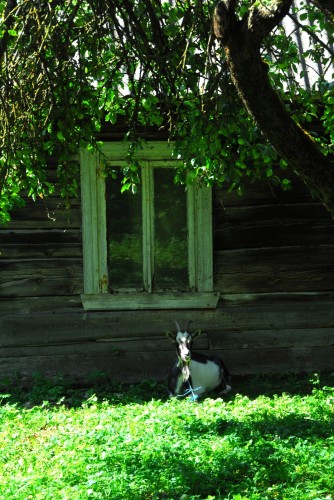 Renata showed us the house, the barn, and the garden. Her niece was visiting, and we took a trip up to Renata’s uncle’s farm. It is difficult to describe how large the difference is between the lifestyle of and average Dane and how people lived in Miroslavas. They are a world apart. Renata’s uncle had a little farm with a cow, a bull, a calf, four pigs, and a dozen chicken on three acres. He did not have a job apart from tending to his farm, but was quite an entrepreneur and sometimes collected metal from the other villagers which he then sold. And that seemed to be the way most people in the village lived. Very far from our cushy jobs and super markets in Denmark. I have nothing but respect for Renata, who have still managed to travel the world and gain a master’s in International Affairs (or something, Renata please correct me if you’re reading this :-)). 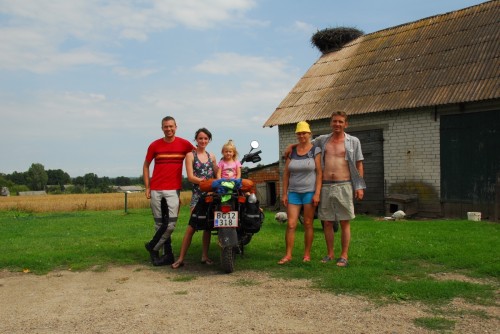 Renata, her niece, aunt and uncle. And then me.

At some point Renata’s uncle (translated by her) said that for us it had to be like coming to Africa – hinting that we were the rich westerners who had jost dropped by on a whim to visit some poor people, and could ride on as soon as we wanted too. It sounds negative here, but it was really just a statement. That gave food for thought. Even more later on, when I leaned that my motorcycle had cost more than Renata’s mother’s house. 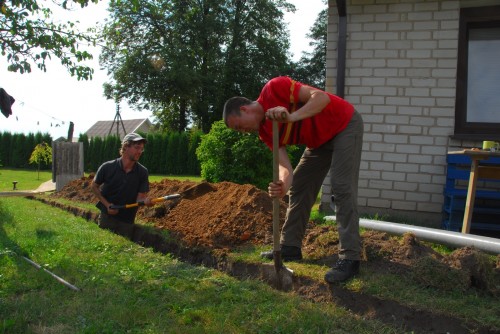 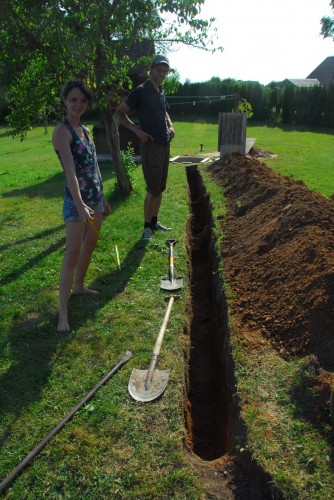 We dug a full two shovel-lengths.

Everybody we met were incredibly nice and welcoming. Even if it felt a bit too much like a safari at times, since we just walked around looking, unable to talk to people in their language, I think we all enjoyed meeting each other. We finished the day by digging some of the trench which will hold water pipes going into the house and thanked Renata and her mom for having us. We jumped on our bikes and rode the 100 km to Vilnius where we set up camp for the night after a great day in good company. 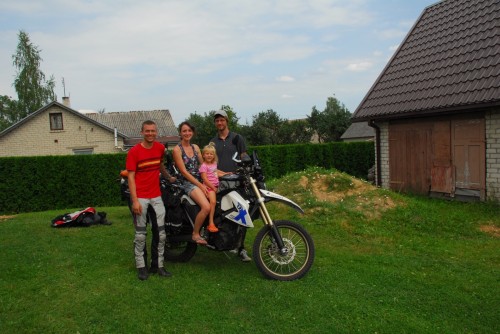